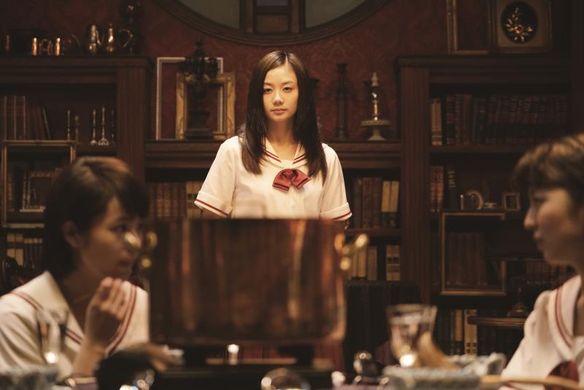 Five members of the Seibu Catholic Girls School literature club join together for an evening of food and storytelling. The theme of this meeting is to be the death of one of their group, Shiraishi Itsumi. We discover that Itsumi was a popular pupil at their school and all of the girls looked up to her. As each girl steps up to tell her story the blame for Itsumi’s death is shifted as they point fingers at one another. Doubt over the cause and motivation for her murder arises and we also discover that Itsumi may not be all she seems.

Directed by Saiji Yakumo, the film is structured as a series of flashbacks branching off from the framing device of the dinner party. This creates a great pace as each story is relatively short and brings up numerous questions about the other members of the group that makes you want to keep watching. As the revelations and recriminations come forward the relationships of the characters change and we are forced to reassess our understanding of each of the characters. It is similar in this regard to the classic film Rashomon, as we see various events retold through different perspectives. There are elements of gothic horror in design and story. The girls club house is illuminated with a chandelier and decorated like an English Victorian house. As they discuss Agatha Christie, mystery and horror genres, these all seem to influence what kind of story the film appears to be. The story begins to drift towards the fantastical in parts. This is partly explained by the unreliable narrators and the idea that they are simply telling stories about what happens, but it somewhat undermines the finale as it appears more like the whole film is simply a tall tale rather than meant to be taken seriously. All the actresses do a fantastic job with their characters and their shifting loyalties. Marie Iitoyo, Yuna Taira, Tina Tamashiro, Riria Kojima, Nana Seino, and Fumika Shimizu all embody the various personalities perfectly and have good chemistry together on screen, shifting from friends to enemies.

Girls in the Dark is an examination of subjectivity. Their recollections increasingly contradict one another or are coloured by their personalities. It is an interesting take on the genre of the unreliable narrator and the audience is always one step behind the girls as they have knowledge that is hidden from us. It examines the idea of how meaning is created, forcing the viewer to constantly reexamine their own biases and critically evaluate what they are being told. When they lack all the facts it is hard to know who to trust, so they are left with the subjective reminiscences, or even outright falsehoods, to establish a sense of reality. I would recommend this film as a great mystery drama with fantastic performances and a unique way of telling its story.