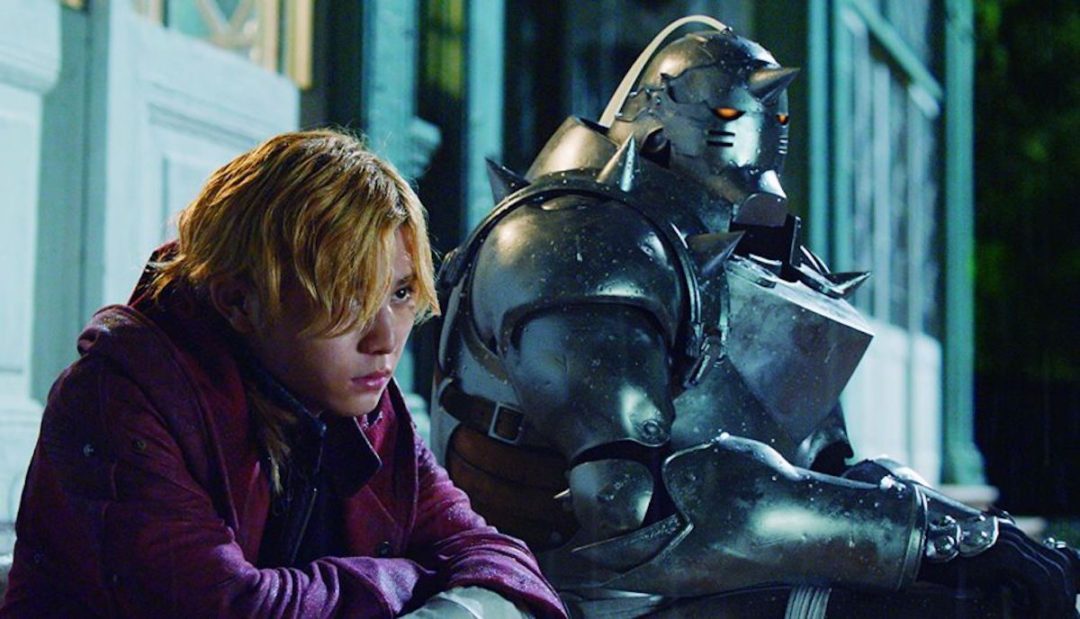 Based on the popular manga and anime franchise “Full Metal Alchemist” follows the story of Edward and Alphonse Elrick on their quest for the Philosopher’s Stone. Beginning in a charming, rustic setting we see the two young boys as they witness the sudden tragic death of their mother. The two decide to attempt to resurrect her using the practice of alchemy. In this world, alchemy is a sort of magic allowing practitioners to create almost anything provided the users skill and observance of several laws. These include the Law of Equivalent Exchange, which means that for anything to be created something of equivalent value must be destroyed. The two fail in their attempt to bring back their mother resulting in Alphonse losing his body and his spirit being subsequently bound in a giant suit of armour, and Edward losing his arm and leg. Years later the two are searching for the Philosopher’s Stone and soon cross paths with the military police, other alchemists, and a mysterious trio of Lust, Envy and Greed, a terrifying triumvirate with their own nefarious plans.

With the success of the manga and anime it seems almost inevitable that a live-action film would at some point be made. To begin with the positives, the film’s opening scenes are well-put together. the backstory is told succinctly and emotionally, setting up the two brothers relationship and their fundamental motivation. The following action sequence stretches the budget of the production almost to breaking point, but is nevertheless a noble effort, creating an exciting showdown to get things moving. It is clear that all the actors involved are enjoying their time and the creators utilise the series humour to avoid it becoming a sombre affair. Unfortunately, some of the jokes don’t land and the over-the-top acting in an attempt to ape the art of the anime and manga is often distracting. By far the best scene in the film comes later when the brothers fight in a warehouse after feelings of sibling animosity boil over. In a moment we are drawn in and given an emotional beat that is largely absent from much of the rest of the film. For the most part attention is given to the fantastical and science-fiction elements rather than dwelling on the characters or themes for any length of time. In attempting to compress a long story down to a two-hour runtime we are given many scenes of exposition or plot advancement without much emotional investment. This becomes more apparent in the final showdown when everything does come together in a visually entertaining action sequence but with a stark lack of emotional investment in the characters. The film-makers did a great job with Al’s armour and the character was believable, but ironically it seems they struggled to bring Ed to life as effectively. Ryosuke Yamada seems too old for the character and jokes about his height fall flat due to his not being noticeably shorter than a lot of other characters. Yasuko Matsuyuki was delightfully devilish as Lust, and the rest of the supporting cast did a decent job with their interpretations of various characters.

Full Metal Alchemist has a surprising amount of ideas present for what will be seen by some as a simple fantasy yarn. At its heart the idea of losing something in order to gain something is a powerful trope in literature. The two brother’s exemplify this as they are on a quest to recover Alphonse’s body, which makes the audience question what it is they are losing at the same time. A darker interpretation of this may be that the two had to lose their mother in order to become proficient at alchemy and fulfil their roles as powerful magic-users in the service of others. Alphonse comes to question his own identity, knowing that he is no more than a spirit ensconced in a hollow shell and having been told his memories may be false, he is confronted with the deeply troubling thought that his existence may be only as a simulacrum. This opens up all manner of religious and philosophical argument about the nature of being which is later emphasised in the final act of the film. Another debate that is touched upon in the film is that of science’s importance and how far people should go in experimentation to the end of discovery. The ghost of Japan’s own past with prisoners of war and cruel scientific experiments is raised a number of times along with a more pointed critique of militarism later on. Overall, the film is likely to be seen as a missed opportunity, but it is for the most part an engaging fantasy tale that raises interesting questions albeit hampered by a constrained budget and occasional lack of imagination.