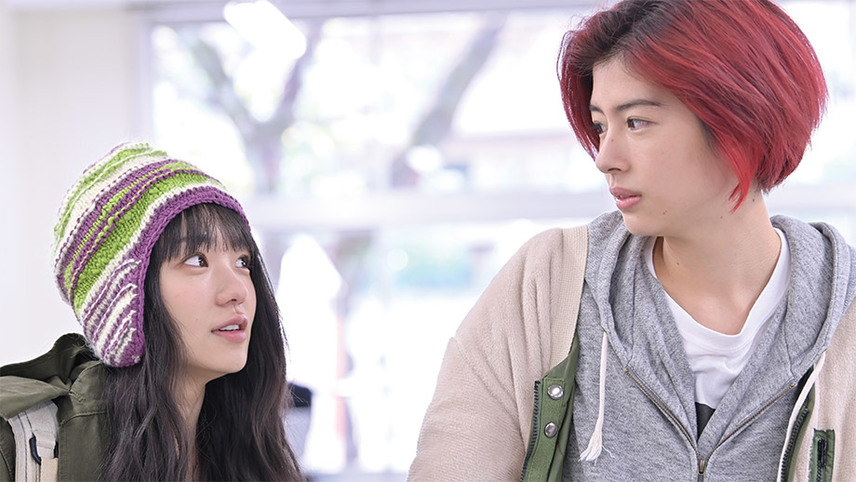 Eternally Younger than those Idiots (2020) by Ryohei Yoshino

Secrets and traumatic memories lurk beneath the surface of this university drama. Student Horigai (Yui Sakuma) is due to submit her thesis, gathering questionnaire responses on childhood experiences and how this affects people’s dreams for the future. When her friend asks her to take notes in a philosophy class, Horigai meets Inogi (Nao), a student with her own troubled past. Horigai and Inogi become firm friends, offering mutual support as they deal with various issues. Horigai’s dream is to work in child protective services, a long term goal since she saw a kidnapping case on the news many years before. In this world where everyone is struggling with personal problems or emotional stress, including her colleague Yasuda (Yo Aoi) and Homine whom she has a crush on, Horigai wonders if she has what it takes to help others, or even herself.

Based on a novel by Kikuko Tsumura and directed by Ryohei Yoshino, “Eternally Younger than those Idiots” is a film that creeps up on you. The opening sequence of students enjoying a drinking party, mocking Horigai’s choice of career and her virginity, seems perfectly innocent, drawing you into a youthful, playful atmosphere where people seem to be enjoying life albeit in that aimless way typical of young adults who are not quite sure how their career will pan out. But little by little we discover the secrets, anxieties, and traumas, which lie beneath the surface of each of the characters. Sexual problems, rape, suicide, child neglect, divorce, all of these things are introduced in a naturalistic way, simply elements that make up people’s characters. The film avoids exploiting these issues, but instead focusses on the way they have shaped those affected. Yui Sakuma and Nao give incredible performances as Horigai and Inogi, both with a great sense of fun and humour, but hiding darker secrets. Their excellent chemistry makes the scenes with both of them very satisfying and their friendship believable. The film relies on character and script with most of the traumatic incidents only mentioned by characters. Yoshino’s direction keeps things interesting and the sets often evoke a great sense of atmosphere, using the environs such as spacious lecture halls, the posters of models on Horigai’s walls, or the cluttered space of Inogi’s apartment to tell us more about these people and their lives. moves the story along, using its environments, spacious lecture halls, or the confusion of Horigai’s apartment to highlight particular moods. The camera is also used to separate characters, or frame them in particular ways that emphasises their relationships. The film will often have character speaking over the phone, a great visual way to show the emotional distance between them.

“Eternally Younger than those Idiots” manages to balance upsetting themes with charming characters and beautiful cinematography. In eschewing explicit depictions of the darker elements it creates a powerful emotional resonance as we see the characters struggling with their own sense of impotence or victimhood. The film explores how powerless people are to change situations, especially past tragedies, and how they affect psychological development. It offers no easy answers, rather allowing us to experience this sense of helplessnes along with the characters. There are brighter moments in the film, with Horigai and Inogi’s relationship offering many entertaining moments in the depiction of a firm friendship born of shared experience. The film also suggests that people do have control over what they do, with Horigai’s determination to follow a path of child protection, and Homine’s helping of a neglected child, showing that there is light in a world that is full of evils. It is not possible to alleviate all the problems of the world, but you should try to make things better where you can.