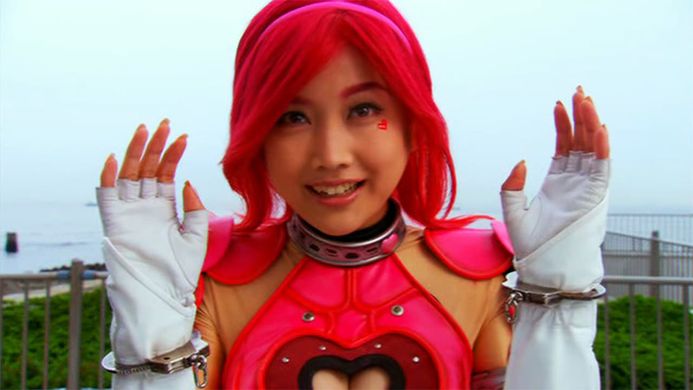 An office worker by day, Honey Kisaragi (Erika Sato) has the extraordinary power of being able to change her appearance at will with a press of her heart necklace. She keeps her power up by eating copious amounts of her favourite food: onigiri. Her alter-ego Cutie Honey is a powerful crime-fighting superhero who as well as being able to transform into various costumes and disguises is virtually indestructible and fairly handy in a fight. When the Panther Claw group, led by Sister Jill along with her four supervillain underlings, Gold Claw, Cobalt Claw, Scarlet Claw and Black Claw, appear causing trouble, Cutie Honey steps in to save the day. She is assisted by Natsuko Aki (Mikako Ichikawa) and Seiji Hayami (Jun Murakami).

Directed by Hideaki Anno (Love and Pop), the film revels in a hyperactive comic-book style. Rather than attempting to turn the fantastical premise into a real-world drama, it instead embraces its origins in manga and anime. The manga was written by Go Nagai and later adapted into several television series. The opening scenes, with outlandish costumes, wacky special effects-driven fight sequences, frenetic editing, and ridiculous levels of destruction setthe stage for much that is to follow. The film is an out-and-out comedy and there is rarely any serious threat or emotion on display. Cutie Honey is a likeable lead. Kisaragi is absent-minded, obsessed with onigiri, while Cutie Honey is strong, resourceful and more than capable of taking on the bad guys. A great performance and Erika Sato excels in both roles. There are also nods to the somewhat exploitative anime version with former model Sato either in the bath, or in her underwear. The supporting cast gleefully ham things up in this comedic melodrama. Cutie Honey is full of surprises, unrestrained by a desire to be realistic, such as when one villain introduces themselves with a song and dance number. The extravagant costumes of the villains show an attention to detail and a desire to faithfully recreate the feel of a live-action anime.

Cutie Honey has some great visual gags and is clearly aimed at a younger audience. An entertaining protagonist and the film’s sense of anarchic freedom gives it an exciting edge. A lot of live-action adaptations shy away from the silliness of their source material, whereas Anno embraces it, attempting at every turn to outdo the original and utilising every tool in his arsenal to do so. The character has a good, if predictable, message about friendship and doing the right thing. But it is surprisingly fitting for the character, whose admirable qualities outshine her apparent naiveite.