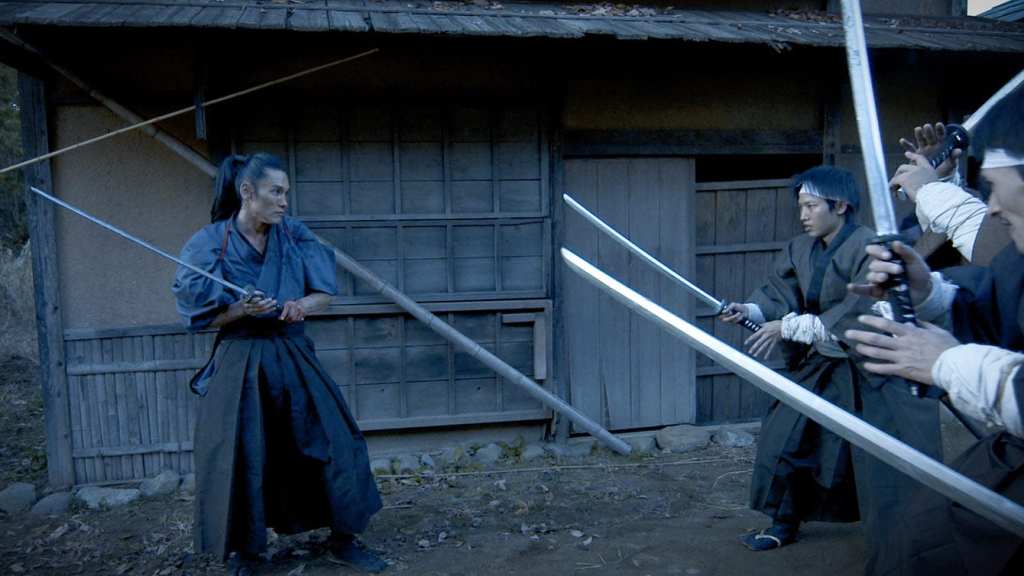 Tak Sakaguchi (Versus, Re:Born) is known for his action films, both a competent stunt performer and choreographer. This ambitious project is centered around an incredible one-take fight sequence that stretches to 72 minutes. Bookended by a short set-up and conclusion, the film is a showcase of the stunt teams swordplay. The film begins by introducing us to a clan who have recently lost two of their leaders. Their new head is to be a young boy, but first they intend to kill the man who took out their previous lords. That man is Musashi Miyamoto (Tak Sakaguchi). With a force of one hundred soldiers and further three hundred mercenaries, it seems they are more than prepared for this legendary swordsman. What follows is a stunning display of martial prowess and stamina as Miyamoto proceeds to cut his way through swathes of opponents.

Written by Atsuki Tomori and directed by Yuji Shimomura, at times this film becomes as much of an endurance test for the audience as it is for the performers. Your enjoyment of it may depend on your interest in swordplay. There comes a point, perhaps around the hundreth or two hundreth person Miyamoto has cut down, where you are either fully engaged or counting down the remaining adversaries. That said the film does have a lot to recommend it. The 72-minute one-take action sequence is certainly an audacious proposition, demanding a skilled team to pull-off effectively. Tak’s martial arts choreography and the performers do an admirable job. The film keeps things interesting by moving the action continuously, from woods, to city streets, indoors to outdoors, and mixing up the fighting and staging to lend variety. It is incredible to watch things unfold in real time, with the occasional breaks in the action showing the strain on Saguchi as he rehydrates, his fighting style becoming less sure and more exhausted as things progress. We see occasional change-ups in the fighting too with one opponent carrying a flail, though the majority is sword to sword fighting. It is hard to critique too harshly given the scale of what they are attempting here, but there could have been more use of close-quarters fighting, knife work, or more varied weaponry. The historical Miyamoto is best known for his two-sword style, which we also see brief glimpses of here.

The camera-work is exceptional, managing to capture some genuinely emotional and poignant shots amongst the carnage. There are a number of unavoidable weaknesses to this style of shooting: opponents waiting their turn to attack; certain people who should be dead circling round for the next sequence, the oddly placed water bottles; but for the most part these are minor details that pale next to the sheer thrill of seeing this single take sequence. It is worth noting that the action is broken up and there are story elements littered through the film. Though dialogue and characters are sparse, they do help to break up the waves of attack and prevent the film becoming overly monotonous. Perhaps the biggest issue is the lack of a sense of danger or reaction to events. In a conventional film, cutaways would show the aftermath of the action, the fear of those waiting for the inevitable doom, the protagonists anger or fear, along with set-ups and character work to give the action some weight. While attempts are made to do that here, there are stretches where the action lacks substantial emotional content. The music by Hidehiro Kawai is stirring, helping to bring a much-needed sense of drama and passion to the action. “Crazy Samurai: 400 vs 1” is perhaps more of a curiosity, constructed around an ambitious gimmick, than a conventional film, a startlingly audacious display of action choreography, that rewards your patience with some incredible moments.