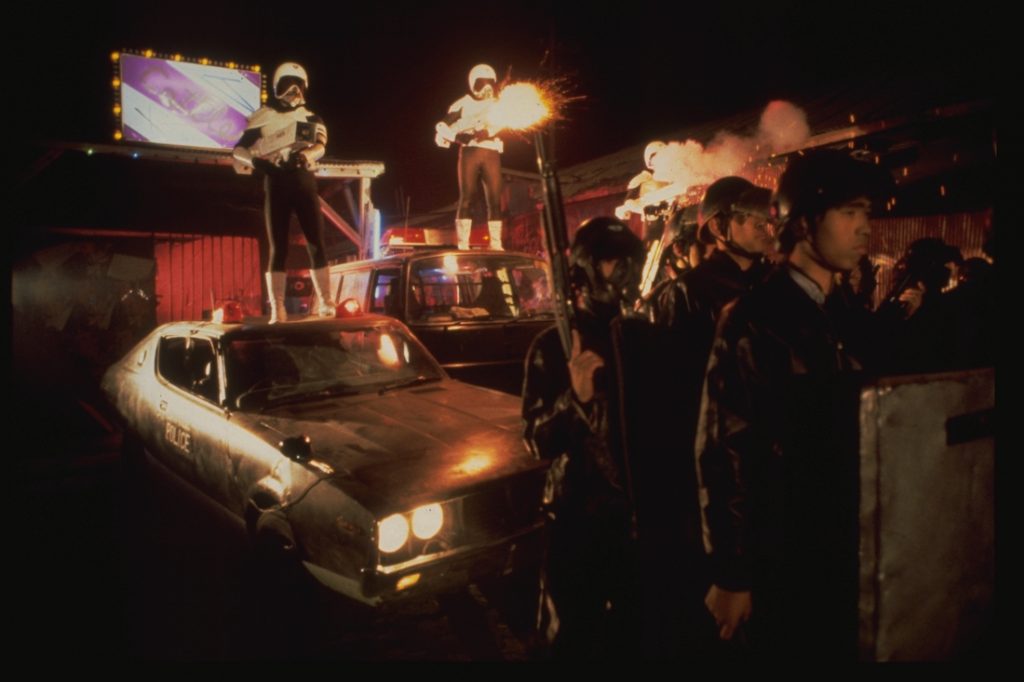 A wild joyride through the heart of the punk subculture of the early 1980’s, “Burst City” offers a snapshot of the rebellious spirit of a generation. The film revolves around a number of punk gangs and their struggles against the police, each other, and the development of a new nuclear power plant. Every night these leather-clad young men and women gather to rock out to punk bands, take drugs and drag race. Meanwhile, two vigilantes on a motorbike and side-car, drive around looking for revenge for an earlier murder; and a man pimps out a young woman to wealthy businessmen.

“Burst City” plunges us into the heart of the riotous, chaotic heart of the punk movement, capturing and embodying the essence of anarchism, youthful exuberance, violence, and excess that typified it. The plot, such as it is, takes a back seat to a montage of exciting moments, whether it is people engaging in racing their tooled-up cars or the musical performances of several popular punk bands such as The Roosters, The Rockers, and The Stalin. It feels at times much more like a documentary than a film, a collage of characters and scenes that come together to present a complete picture of the period. Sogo Ishii’s direction embraces the spirit of the punk subculture, with a dizzyingly active camera often fighting its way through the action, flashing lights, speeded up footage, and raw energy and creativity mirroring the energy of the subjects. The punk aesthetic exudes from every frame and the rough way the plot and scenes hang together only adds to its charm. The music provided by the punk bands involved also offers a raucous, passionate rage to the film.

As a cultural documentary, “Burst City” offers us a look at a startling and era-defining time. Anti-authoritarian youth sub-cultures found their most strident voices in the punk movement. The shadow of Hiroshima and Nagasaki still hung over post-war Japan, morphing into the activism against nuclear power and nuclear weapons through subsequent decades. Ishii’s film does not delve too deeply into the values and politics of its protagonists. Though we see them fighting with the power plant developers and the police, this seems to be largely down to them being seen as natural enemies, rather than an in-depth discussion of the rights and wrongs of their position. In one amusing scene we see a group of punks asking each other what day it is and what they should be doing, their supreme goal to bring down the goverment and authority forgotten in a haze of alcohol and fatigue from nightly revels. The film seems to both promote their values, while also criticizing their lack of meaningful contribution to society. Likewise, we see this moral ambiguity in the treatment of women. While the young woman forced into prostitution is raped and abused by the businessmen. her horrifying ordeal stands in stark contrast to the mixed-sex congregations of the punk band audiences, and the genderfluidity of their fashion and make-up choices. We also see the drug use affecting the scene, with people lost to the needle, while others enjoy more harmless pursuits. The punk scene is shown as one full of contradictions, with violence and agression sitting alongisde youthful joie de vivre and a search for fun and community. If you want to understand what the punk movement was about and what it meant to those who lived through it, this film offers a warts-and-all portrayal of the scene.