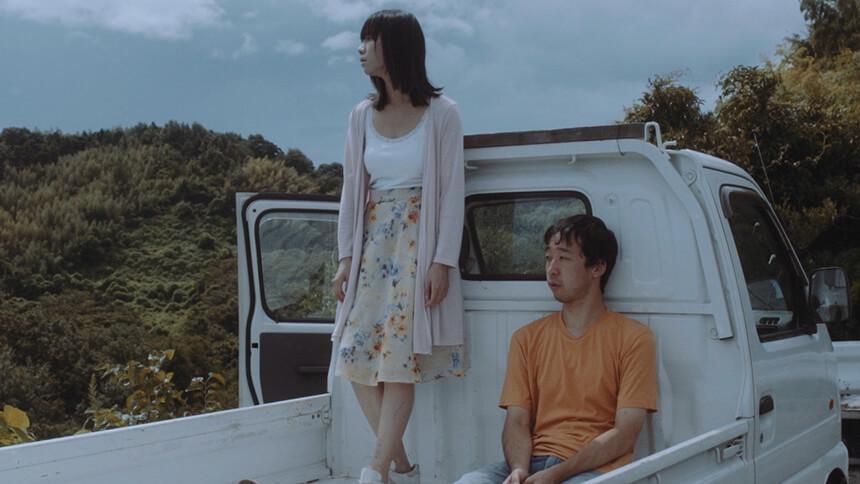 Daisuke (Yusuke Takebayashi) is on the run after attempting to murder a man who he believed to be beating his child. While driving away in a stolen car he hits a woman who is standing in the road in the middle of the night. This woman is Natsuko (Bi Yo), who is dealing with her own issues. Natsuko is undead, recently returned to life after suffering fatal head injury, and also on the run from an unpleasant and abusive boyfriend (Kosuke Haruki) who has performed a ritual to resurrect her. Daisuke and Natsuko set off together on a curious road trip attempting to outrun their fates.

Writer and director Eiichi Imamura delivers a unique take on the romantic road movie genre, and a reimagining of zombie movie tropes. The film keeps a close eye on the two protagonists. Yusuke Takebayashi’s portrayal of the nervous, stuttering Daisuke, immediately evokes sympathy for him. It is clear early on that he is not a hardened killer. As the film goes on he gains in confidence and we see him develop a better understanding of himself. Bi Yo’s Natsuko is the catalyst to his transformation, her easy-going attitude and humour helping him come out of his shell. She exudes charm and it is interesting to see the zombie here as a thinking, feeling being, which adds a layer of tragedy to the character. The two of them play well off one another and their relationship develops naturally without melodrama. The film has a gentle pace as the two travel together and gives the audience plenty of time to ruminate on the themes of fate, death and human relationships. Everything else seems to fade into insignificance as they drive along, with many scenes having only the two of them lost in their own conversations. The film will occasionally cut to Natsuko’s boyfriend (Koki Nakajima) as he attempts to find her, but for the most part it is Daisuke and Natsuko’s relationship that provides the impetus for the drama. The film ably manages to drift between blackly comic whimsy, in Natsuko’s reappearance as a zombie, and tragically doomed romance. The cinematography, by Kosuke Haruki, sets off this tone perfectly with golden sunsets and soft natural lighting that creates a relaxing vibe throughout. The smooth meditative score likewise heightens this sensation of a slow drift towards the inevitable as Daisuke and Natsuko continue their journey.

“Beautiful, Goodbye” is a film about the relationship between Daisuke and Natsuko and their reliance on one another. The metaphor of a lightbulb and a plug socket is used, fittingly unusual for the characters, to demonstrate their interdependence. The fact that Natsuko is a zombie from the moment they meet helps draw attention to the inevitable, that both of these characters are heading down a dead-end street. The only thing they don’t know is how long the road will be. As such both are forced into making the most of the time they do have. It is this also that adds the aforementioned element of doomed romance to their story. The audience realises that whatever happens, the relationship between a man on the run for attempted murder and a zombie, is unlikely to have a happy ending. Despite the darkness at its heart, it is a film that on final reflection comes with a great deal of hope. The chance meeting of these two characters proves to be a fortunate encounter with both coming to understand and reflect on who they are and what they have done. Though their time together may be short, it helps both to understand what it is they are living for. “Beautiful, Goodbye” gives us a fresh twist on the conventional road-trip romance, with captivating central performances and a transformative message about life and death.