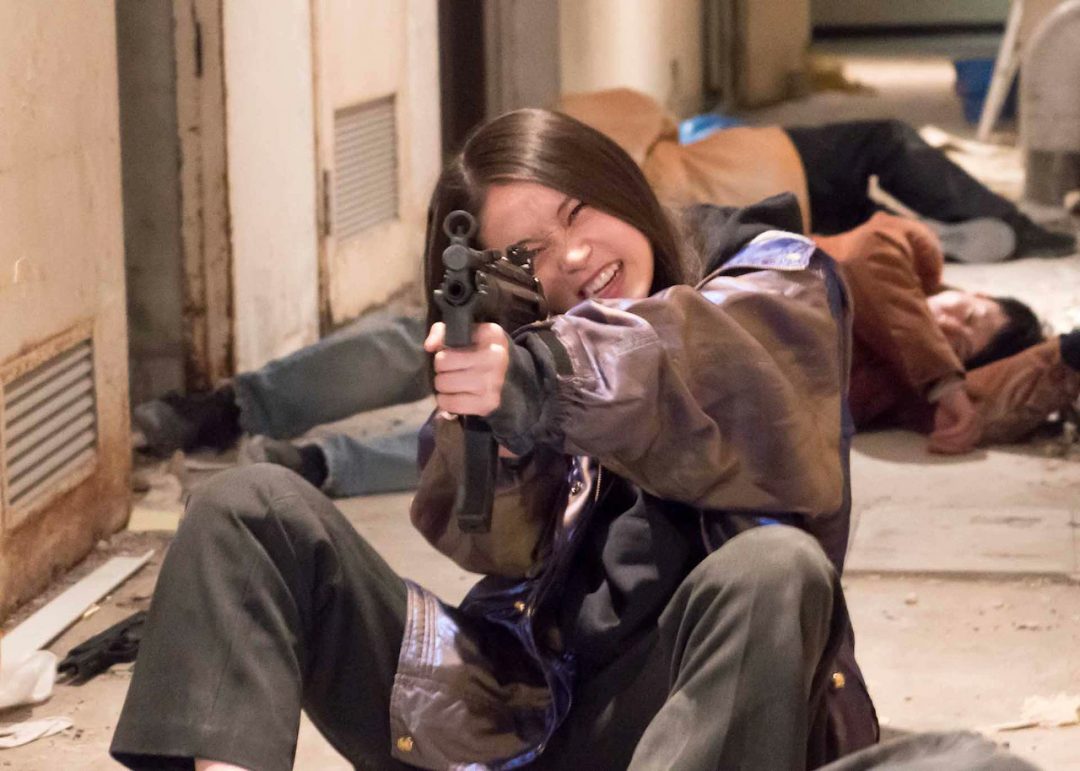 Two high-school assassins attempt to develop covers as ordinary members of society in this action-comedy. Mahiro (Saori Izawa) and Chisato (Akari Takaishi) are skilled killers but lack any knowledge of the real world, having comfortably managed to maintain a front as high-schoolers while they carry out jobs for their mysterious employer, a man who delivers targets to them from time to time. They are told that they should move in together and start looking for part-time work, a prospect which doesn’t appeal to either of the girls. As they struggle to adapt, with Mahiro failing a series of interviews, and Chisato finding employment in a maid cafe, a fresh threat appears in the shape of a violent Yakuza boss and his children.

Written and directed by Yugo Sakamoto, your enjoyment of “Baby Assassins” will vary based on the mileage you get out of the comedic premise: the juxtaposition of hardened, efficient killers and absent-minded, socially-awkward teens. This whiplash from murder to mundanity provides much of the humour, with one scene showing them disposing of a corpse before moving immediately onto worrying if they have time to make the film they have tickets to. “Baby Assassins” wastes no time and at just over 90 minutes, it moves at a lively pace. This is understandable as the story is simplistic and the sadistic Yakuza villain is such a familiar archetype he hardly needs much introduction. The highlight of the film is the relationship between Chisato and Mahiro, with fantastic performances from Akari Takaishi and Saori Izawa. They capture the bored teen mindset and also look extremely competent in the action sequences, shifting seamlessly from cold-blooded murder to everyday concerns about ruining their clothes. This relationship also provides the emotional heart of the film as their differences lead to confrontation between them. Mahiro is introverted and slightly less well-suited to adult life, while Chisato is more bright and cheerful, easily able to adapt to part-time work at a maid cafe. The action sequences, courtesy of stunt director Kensuke Sonomura are gory and energetic, with emphasis again on the humour rather than any serious consequences, showcasing the girls’ training and utilising gun-fu and hand-to-hand combat. The final third is taken up with a highly entertaining takedown of the Yakuza orginization, which comedically undermines this fairly stereotypical third-act sequence by having the girls comfortably dispatch most of them, completely emasculating the hard ganster aesthetic. This ease in which the killings sometimes proves a double-edged sword, providing a few laughs at the casual way the girls deal with their targets, but also leaving little time for any real tension. This is most apparent in a scene in which two major villains are dispatched, their deaths used as a gag that comes as a surprise but leaves you feeling that the film has robbed you of a more significant confrontation between the heroes and villains.

“Baby Assassins” is a fun take on both the assassin genre and the teen friendship movie, running these parallel stories of Mahiro and Chisato attempting to get along as well as the background evil of the Yakuza. The best scenes are in the maid-cafe with Chisato taking to it easily, while Mahiro is visibly uncomfortable with attempting to present a cheerful face to the public. There is a subtle satire on the current state of work and how young people are supposed to adapt to society, brought out when the girls speak with the maid cafe staff. The top maid is amazed that they have so much money for lunch, barely able to afford a decent meal herself. The girls are financially stable through their assassination work, part of the reason why the jobs they are applying for hold so little interest for them. It is not something the film dwells on, but it certainly makes you wonder whether a world in which murder is remunerated far better than almost any other job is one that is functioning correctly. There is also a feminist bent to the film, with the young women being constantly underestimated by their targets, which makes it even easier for the girls to kill them. The film sets up two entertaining characters, with enjoyable central performances, and it is a film that lends itself perfectly to sequels. While the film is light on story, it works well as an introduction to the characters and world and it would be great to see more of them.