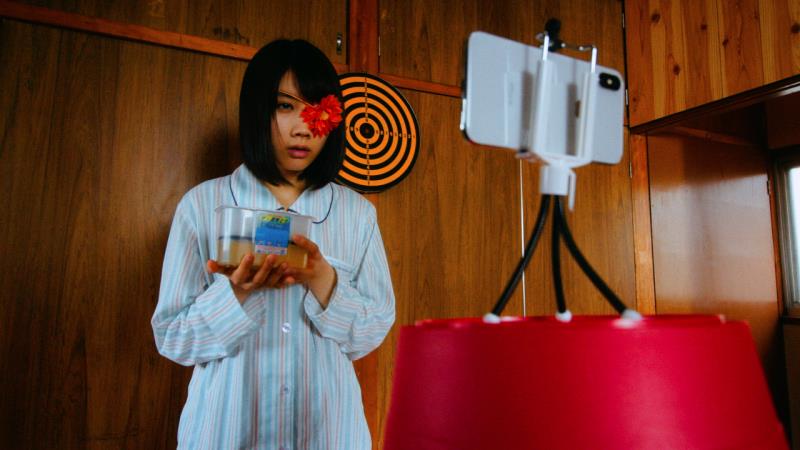 Lala Suzuki (Honoka Matsumoto) lives in rural Gunma with her mother and younger brother. Her main creative outlet is her YouTube channel, where she creates a bizarre character that she seems to carry on into her everyday life, including wearing an eyepatch and wandering around with a large mallet. When she receives a call to say that a television company wants to come and film her she sees her big chance, but her hopes are dashed when the company executives change their mind after seeing her videos and decide not to run the show. Lala’s frustrated, angsty behavior is explained when we discover that her twin sister, Lili, is a successful personality working in Tokyo, having succeeded at an interview which Lala failed.

Written and directed by Daisuke Ono, the film is ostensibly a comedy, but often feels more like an emotional drama as we watch Lala slowly succumbing to feelings of rage and resentment towards her sister. On first viewing the film can seem lacking in jokes, with a few sparse laughs and long stretches where little to nothing is happening. Lala seems disaffected and prone to aggressive outbursts. Her ‘comedic’ videos are largely unfunny, with her bizarre sense of humour almost impenetrable to anyone but herself. It becomes apparent only later in the film that this is not a comedy in the conventional sense, that we are actually not meant to laugh at Lala, but to sympathise with and perhaps even pity this character. She is a failure on her own terms, but unable to see why she is not famous or accept any other course than the stardom she feels she deserves. She feels ill-treated by the world. The film can be a difficult watch at times, and takes reflection to see the funny side of what is happening. The deadpan humour and drawn out jokes can seem impenetrable, but there are some fantastic lines and moments that have the feel of a cult classic in the making. Honoka Matsumoto gives a fantastic performance in twin roles as the disaffected Lala and the successful sister Lili, creating a believable tension between the two, even in scenes where she plays opposite herself. She is supported by a small cast including Mayuko Nishiyama and Taketo Tanaka as her long suffering mother and brother.

“Astral Abnormal Suzuki-san” is an offbeat comedy about someone who is struggling to succeed in a world that is obsessed with fame. The use of twins is a clever way to show that for every successful actor there are many more who will never be recognized and who will spend their lives as complete unknowns. This accounts for the film’s peculiar tone in that it is following the character who did not make it, who is not succeeding in fulfilling their goals, and who feels isolated, depressed and frustrated about her lack of recognition. There is a moment in the film when Lili is on television with a fake brother and mother played by actors (adding insult to injury, Lala is not portrayed at all in the family unit), and given a fictitious backstory. It shows the unreality of television. As Lala tells her student, everyone involved in the media is a liar. While the humour may be hit and miss, the performances are strong and by the end of the film you begin to sympathise with Lala’s situation.