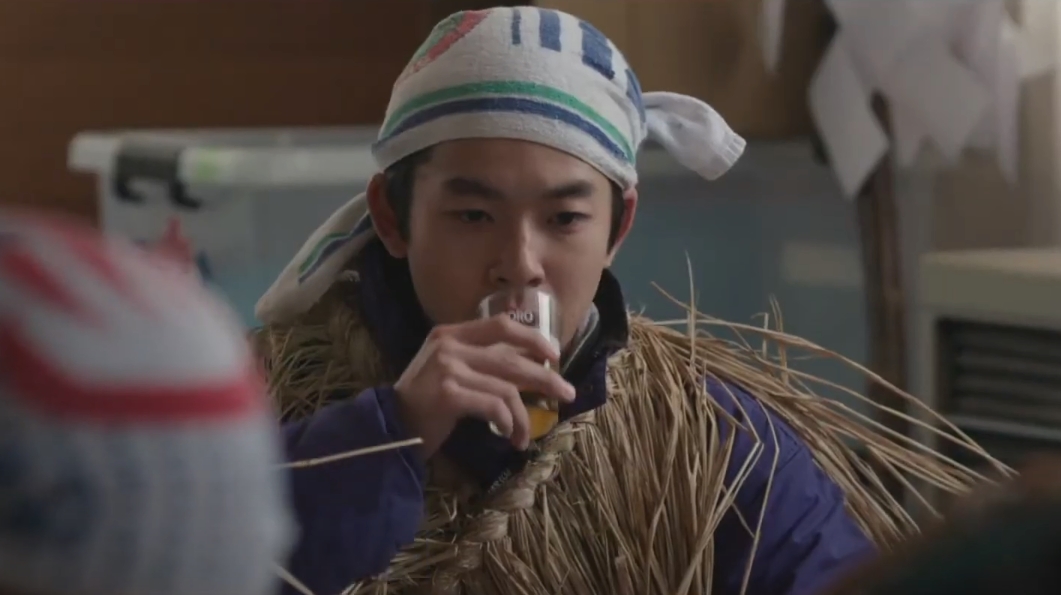 A young husband and father, Tasuku (Taiga Nakano) tries to make amends for his previous misbehaviour in this emotional drama. The Namahage festival is a point of local pride in the northern town of Akita. Each year men dress up in straw costumes and terrifying demon masks, moving from house to house warning children to be good and not to cry. Tasuku heads out to the festival, leaving his wife Kotone (Riho Yoshioka) and young daughter Nagi at home. However, after drinking too much he ends up running down the street naked, embarrassing both himself and the town. What’s worse is that the festival was being televised to give the whole country a look at this important tradition. Two years later we find Tasuku living in Tokyo, having separated from Kotone. His best friend Shiba (Kanichiro Sato) turns up and encourages Tasuku to come back to their hometown. Tasuko sees the opportunity to redeem himself and perhaps rekindle his relationship with Kotone and his daughter.

“Any Crybabies Around?”, written and directed by Takuma Sato, gives us a look at a rural community in northern Japan and the festival of Namahage. It is always great to see these cultural traditions represented in film, in much the same way that the recent “Ainu Mosir” focussed on the Ainu festivals. It is a film in which relatively little happens, instead focusing on character, the plot is essentially Tasuku asking for forgiveness for what he has done and trying to come to terms with his past mistakes. The sedate pacing gives the audience time to reflect on what has happened and sympathise with the characters, allowing you to make your own mind up on whether his fate is justified. The acting from Taiga Nakano and Riho Yoshioka as Tasuku and Kotone gives us a look at a separated couple with an uncomfortable relationship. What remains of the love between them is hidden beneath layers of hurt and shame, their recriminations often painful to witness. Scenes of sparse or no dialogue give the actors great opportunity to show their talent, drawing us in to the story of this doomed romance, and again giving the audience final judgement on their actions. The cinematography utilises the landscape to heighten the emotional tension. The crashing waves against the cliffs are a perfect visual metaphor for both the surging passions of Tasuku and the impassive, monolithic traditions of the town that shape everyone who lives there.

The film is about a man atoning for past mistakes and trying to make things right. As a young father, Tasuku’s drunken escapade may hardly seem like the kind of thing to worry about. However, in this rural town we feel the oppressive weight of tradition and the importance of compliance to cultural norms. As in many tight-knit communities, each person is bound to each other through ties of heritage, and the significance placed on continuing traditional festivals such as Namahage is a matter of more than simple pride for some. Tasuku’s behaviour is considered a disrespect to the town elders, perhaps even past generations, more than an unfortunate error of judgement. Tasuku is a tragic hero, his odyssey seeing him in self-imposed exile in Tokyo before finally making the journey back to his hometown. This semi-mythic narrative works well with the focus on Namahage, almost creating its own legend alongside that more ancient one. It is also a film about the loneliness of ostracization for those who have fallen short of what society expects. In showing us the aftermath of a man who has erred and is on a journey of redemption, the film gives us an insight into the often stifling nature of society, where respect for the past is of paramount importance. The final moments of the film are a devastating denouement, with a heart-wrenching scene that works perfectly both narratively and symbolically. A worthwhile watch about a man struggling to regain his place in society after a spectacular fall from grace.