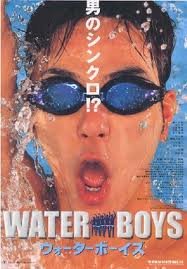 Suzuki, the sole member of his high-school swimming team, is joined by many more when a new young teacher joins as coach. When she decides to form a synchronised swimming team she whittles these recruits down to an awkward group of five who are willing to carry on her dream, even when she leaves to have a baby. As the boys train they gain in confidence and ability as the move towards the end of term event where they will perform.

The film moves at a quick fire pace and continually wrong-foots the audience with minor plot twists and unexpected jokes. The acting and camaraderie of the leads is heart-warming as this odd quintet pursue their unusual dream. A fantastic feel good summer film which, despite a tenuous  premise, fills the running time admirably with plenty of laughs. The direction is similarly beautiful and the synchronised swimming is surprisingly good when it does happen.

A film about friendship and the sense of achievement which comes of seeing something through to the end despite people’s raised eyebrows the film is a triumphant celebration of that end-of-high-school feeling. Definitely a recommended watch if you want a solid summer comedy.