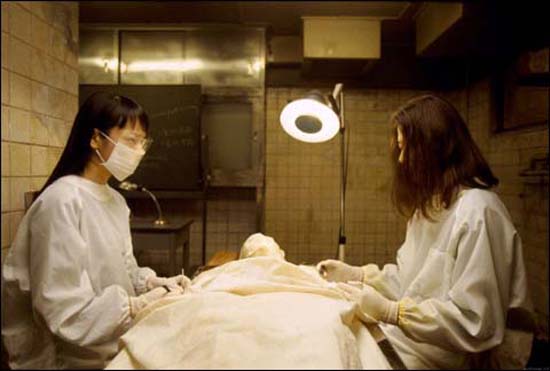 Tadanobu Asano stars in this tense thriller about love, loss and dissection. After waking up from a car crash suffering severe amnesia Hiroshi Takagi (Asano) restarts his medical training, something which he had given up on. He takes to the subject with a great degree of dedication and skill. When the class begin on dissecting corpses, he is surprised to see that the body they are working on is that of his former girlfriend, killed in the same car crash that resulted in his memory loss. As Hiroshi dissects the body, he has recurring dreams in which he sees the woman, Ryoko, spending time with her in that otherworld beyond life.

Directed by Shinya Tsukamoto (Tetsuo: The Iron Man), this film is more accessible than his earlier work. Despite its seemingly macabre and gruesome plot, it is a surprisingly charming film, largely concerned with themes of grief and human relationships, albeit told in an unconventional fashion. The direction uses a number of tricks to disorient the viewer, jumping from real-world and dream-sequences to create a sense of unreality to everything you are seeing, and including seemingly unrelated scenes of factory chimneys that cause you to ponder their significance. One of the most effective shots in the film, for me, was the image of elevator doors sliding up and down beside each other, a simple but chilling effect that puts you in mind of left-right brain dichotomy, and is subtly troubling. Tadanobu Asano does a good job at portraying the lead, who is not only suffering memory loss, a sense of isolation and alienation from the world following his girlfriend’s death, but is also a studious person who is keen to analyse his own psyche as he examines the corpse on the table before him. If there was problem for me with the film it was in some of the more experimental shots, such as a car crash filmed in negative or the aforementioned inserts of smoking chimneys, but these can be forgiven when experiencing a singular vision such as this. The film is far from generic, so some eccentricity is to be expected in the direction.

A fantastic analysis of the relationship between the conscious and subconscious worlds, and how people are able to deal with grief and loss. I would definitely recommend this film to fans of more bizarre stories. There are a few scenes of autopsy that might not be for the faint-hearted, but overall the film does not rely on shock horror allowing you to get involved in what is essentially a tragic love story.