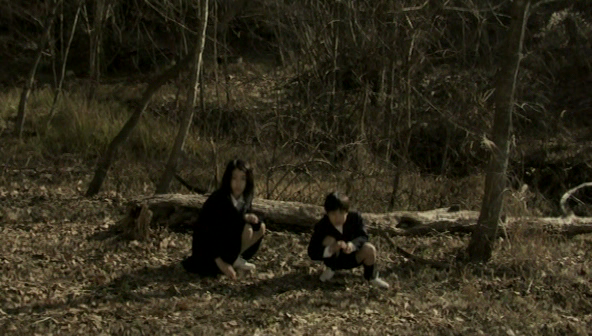 A journalist travels to a remote village to investigate supernatural happenings in this suspenseful horror. Sota (Soko Wada) works at a magazine specialising in extreme content. While he wants to expose the truth about the stories he covers, his boss is more interested in selling exciting stories to increase sales. His boss suggests Sota take on a case involving a drowning victim who was discovered without any internal organs. While sceptical at first, Sota takes the job, travelling to meet the mortician who performed the autopsy, who informs him that the child appears to have never had organs. When this body then returns to life and flees, Sota travels to the remote village of Hinoemura to look into the circumstances surrounding a previous mystery. Years earlier a group of children disappeared on a school trip in the area; but it seems that some of them still roam the woods nearby. Whether ghosts or something more sinister, Sota has no choice but to follow the trail of clues, finding an elderly couple who remained behind in the village along with their son Sadohiro, and who are repeatedly visited by the vanished children.

Based on a short story by Hideyuki Kikuchi, director Makoto Tanaka, who also wrote the screenplay, develops an intriguing horror mystery. In the opening scenes we see an old man mourning his wife’s death when the figure of a child begins tapping on the opaque glass of the door asking to be admitted. It draws in the audience to question exactly what is going on, layering the mystery with the disappearance of the group of children; the body without organs; the existence of unaging children; and a figure who seems to want to kill these children, melding the best of the detective and horror genres. The film falls off significantly after the revelation of what is actually happening, the special effects and rush to the ending not doing justice to the slow build and quietly suggestive horror of the preceding investigation. Soko Wada’s Sota is a likeable protagonist, a typical skeptic drawn into a world of unnatural terrors, although there are hints of a paranoia that are not fully developed. Similarly, the film largely leave the characters as shallow archetypes, instead focussing on creating an eerie atmosphere. When it is at its best, in the dread-filled silences and disturbing peculiarities of Sota’s investigation, it does create a suitable unsettling tone. This is aided by Koji Endo’s score of low strings and ghostly woodwind.

“The Vanished” plays on several tropes of traditional horror: vanished children and supernatural forces. Rather than the usual child ghosts, this film takes on post-mortem demonic posession, with the children being used as bait to lure out others. We also see the difficulty of the bereaved adults to let go of their children, or accept that they are gone. This underlying tragedy provides a degree of emotionality to the standard supernatural monsters, but the film shies away from making this more of a central theme. Sota also feels like a character that should have been more developed. We see briefly following the conclusion of the mystery that he is suffering from a sort of paranoia and visions of his own. It almost feels as if this is an idea that should have been developed in a sequel, as the skeptic suffering doubts about the nature of his reality, but instead it is thrown away as a cheap topper to the main story. Overall, “The Vanished” offers a fun mystery-horror that builds tension and an intriguing story, but is let down by a resolution that fails to tie together the various ideas suggested by the premise.