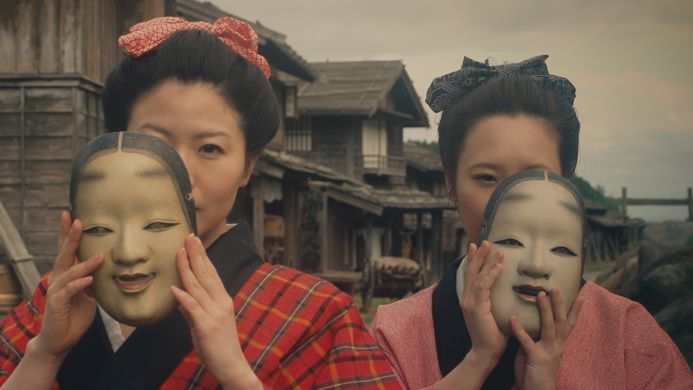 Ninko (Masato Tsujioka) is a trainee Buddhist monk with a problem: despite a religious proscription against carnal lust, he finds himself irresistible to women. As he walks through the town with his fellow monks he is accosted by women who are barely able to restrain their desire. Being dedicated to his chosen path, Ninko resists any and all temptation, but soon he begins to be visited by strange manifestations in his dreams. As he attempts to ward off the thoughts through recitation of sutras, the visions of lascivious women exposing themselves to him and luring him to unwanted thoughts become to much. He flees the temple and sets off on a pilgrimage to find some kind of solace. On his way he comes across a ronin (Hideta Iwahashi) and the two of them travel together to a remote mountain village. There they hear tell of a mysterious mountain woman (Miho Wakabayashi) who manages to entrap men with sexual desire before killing them. The samurai agrees to kill the woman, ridding the village of this fear, and sets out with Ninko to face this peculiar foe.

“Suffering of Ninko” is the debut feature of Norihiro Niwatsukino, who not only wrote and directed the story but was also responsible for the special effects and animated sequences. The story has a folkloric feel about it and this is played up with the use of narration and the interweaving of traditional-looking animation. The film has a great visual style and although the locations used are sparing it does a good job of recreating the period in costumes and sets. The cinematography by Takayuki Okazaki and Shunichiro Yamamoto is a joy to behold, reminiscent of classic period and samurai dramas with vivid colours and camera work emphasising the ambient beauty. The style of animation reflects Japanese wood-cuts or ancient calligraphy and adds to the film’s charm. Masato Tsujioka does a good job with the character of Ninko, a man who is struggling to balance his innate sexuality with his religious duties. The narration by Quoko Kudo is important in creating a tone for the film that suggests it should be read more as a moralistic fable than a true-life account. The main cast is rounded out with Hideta Iwahashi as Kanzo the ronin and Miho Wakabayashi as Yama-onna.

Although the premise of the film, a sexually irresistible man fighting off the advances of insatiable women, may sound like that of a raunchy sex comedy, in truth the film is actually far more thoughtful than this. “Suffering of Ninko” treads a fine line between the sublime and the base and plays on the apparent contradictions inherent in human nature. Ninko’s role as a priest is in constant conflict with his reality as a man and the innate sexual desires that comes with that. Sexual repression through religion has been a feature of many civilizations and here it is brought to the screen in a way that is not overly sombre, but similarly doesn’t take its subject lightly. The removal of masks by characters during his extended sexual dream suggests that Ninko sees through humanity’s seemingly respectable façade. This is further emphasised by his meeting of the woman in the forest, where she talks to him from behind a mask. Kanzo tells Ninko that he both desires sex and is repelled by it, in the same way that Kanzo desires violence but shies from it. This duality of nature is important. There is a shame attached to sex in modern society that is partly, though not entirely attributable to the control exercised by religious organizations. “Suffering of Ninko” features many scenes set outdoors and Ninko’s escape from the temple shows this return to nature narrative. He is a man struggling against instinctive desires in pursuit of something higher in the form of religious transcendence. The film is one that is worth watching as it presents a unique directorial vision that blends arthouse with low comedy, but has a genuine depth of theme and ideas.