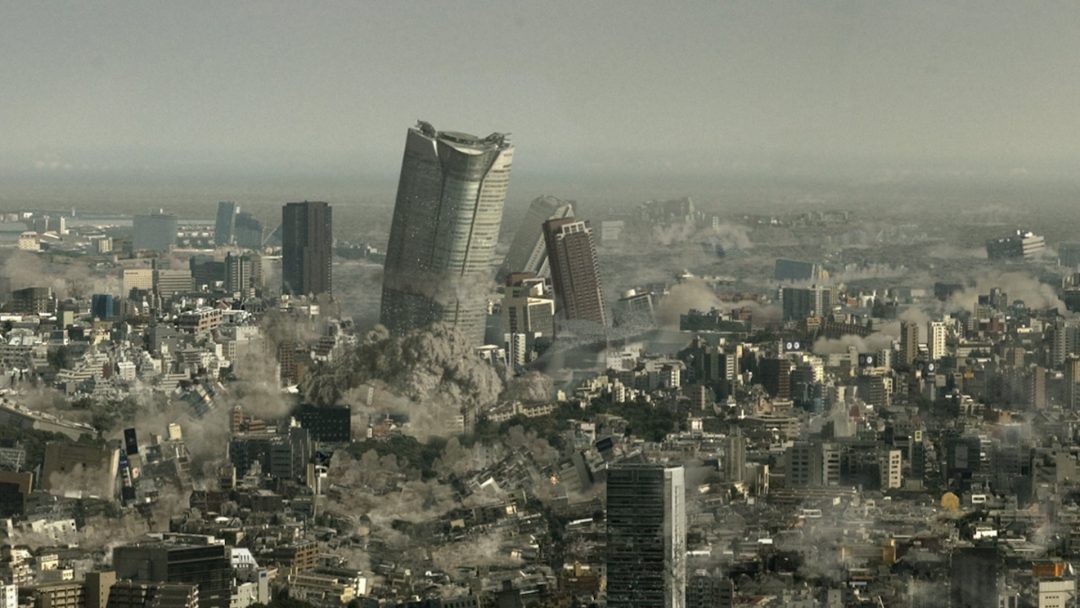 Sinking of Japan (2006) by Shinji Higuchi

Following a devastating earthquake, Toshio Onodera (Tsuyoshi Kusanagi) comes around from his crashed car to chaotic scenes. The city is on fire, and he sees a young girl, Misaki (Mayuko Fukada), stumbling along alone and confused. Before being killed by falling electrical wiring the two are rescued by Reiko Abe (Kou Shibasaki), an emergency services worker. At a government briefing the prime minister is told that due to natural phenomena Japan has no more than five years before it will be entirely underwater. Yusuke Tadokoro (Etsushi Toyokawa), a scientist looking at the tectonic plate activity. realises that in fact they have only a year before this catastrophe is to occur. Japan needs to find a solution to this problem and quick before the whole country disappears.

“Sinking of Japan” is based on a 1973 book by Sakyo Komatsu, and was made into a film the same year. This update, from a screenplay by Masato Kato, takes advantage of modern special effects techniques to show off the power of natural disasters. The story sticks closely with its main characters, telling the story from their perspective. Tsuyoshi Kusanagi and Kou Shibasaki have good chemistry, although the love story between them is a little melodramatic at times. Mayuko Fukada does a great job with her character Misaki, who has perhaps the most tragic story. The film also puts a lot of emphasis on the pragmatic concerns that such a disaster might entail. We see the government making decisions on whether and where to evacuate people and the potential backlash such an influx of refugees may entail. There is a darker subtext too as the government at first decide not to tell people the whole truth about their situation. Special effects are used sparingly, but to good effect. By using only glimpses of the destruction, along with scenes of reaction and much conversation regarding what’s happening, the film manages to avoid putting excessive strain on the effects department. However, it could be argued in a film about a natural disaster such as this there should be more action-oriented scenes. The sets used in the film are good and the cinematography is beautiful (albeit in a heavily stylised way). The soft sunset lighting, even the odd choice of a pop ballad during one scene, show the film to be a product of blockbuster culture that is more interested in emotional drama than realism.

Japan is no stranger to natural disasters, with earthquakes a regular occurrence and a number of major incidents prominent in the national psyche. “Sinking of Japan” plays on the fear of a catastrophic event occurring that is sure to resonate with people. Even more so today with climate change making these events increasingly likely. The film does a reasonable job of looking at what may be the response, both of government and people, to something a devastating as a nationwide natural disaster. A stylish disaster movie with a serious message.