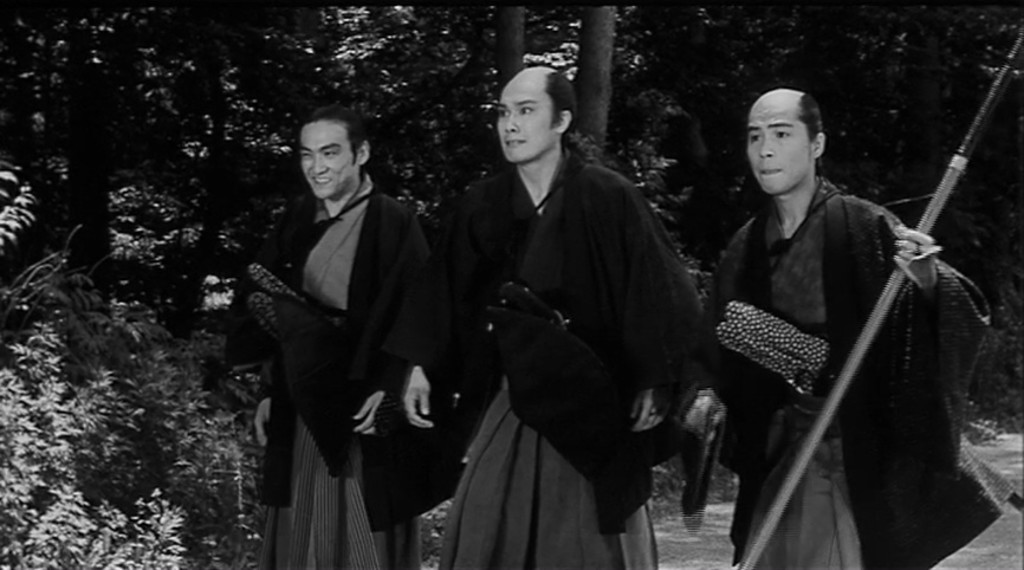 When Kazamatsuri (Tomoyasu Hotei) steals their ancestral sword, samurai Heishiro (Mitsuru Fukikoshi), along with friends, Tadasuke (Ken Osawa) and Shintaro (Naoyuki Fujii), sets out to recover it. Meanwhile his father sends out a squad of ninjas to help getback the sword. Heishiro is later joined by a legendary swordsman Mizoguchi (Morio Kazama) and his foster-daughter Koharu (Tamaki Ogawa), who tries to convince him not to fight Kazamatsuri.

Directed by Hiroyuki Nakano, from a script by Nakano and Hiroshi Saito, “Samurai Fiction” is a highly stylised homage to classic samurai cinema. The film frames its central story rather confusingly with the main character explaining that this is something that happened to him 300 years ago, including a cycling back through the years to the post-Shogunate period of relative peace. It is never explained what he means by this, and it really makes no difference to the story which then mostly takes place in the past. The film, shot predominantly in black-and-white, often references traditional period films, but blended with modern action cinema style. With overhead shots and other inventive camerawork such as characters running towards the camera, the use of narration, striking flashes of colour, occasional tongue-in-cheek references to the tropes of other historical dramas, it is clear that this is intended as a post-modernist reinterpretation of the genre. This is most evident in the soundtrack by star Tomoyasu Hotei, which features rock guitar, country rock, surfabilly, funk, and drum machines, providing a hyper-modern score to the traditional visuals. The story is simple, yet solid, allowing the audience to enjoy a reconstructionist samurai drama with a modern twist, a loving pastiche with enough tension and solid fight scenes to make it enjoyable in its own right.

Hiroyuki Nakano’s stylish samurai drama is an entertaining experience. The director previously worked in commercials and that sense of visual flair is apparent here, albeit sometimes at the expense of thematic or emotional depth. If you are a fan of old black-and-white samurai films, there is much to enjoy here as it draws in story and stylistic elements that will be familiar. A fun action film and a love-letter to classic cinema.