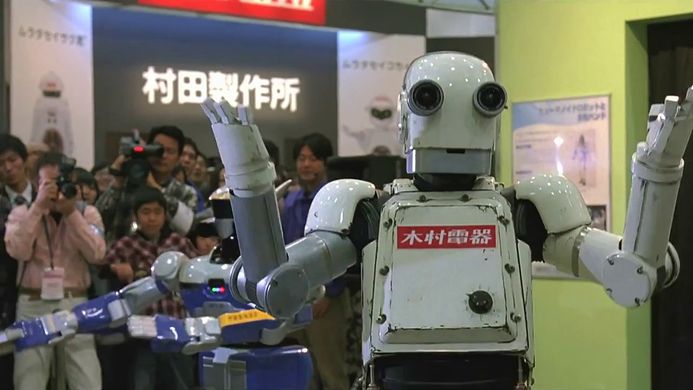 When their robot falls out of a window a week before a major robotics exhibition, three hapless engineers need to find a way out of their dilemma. They decide to hire an elderly actor, Shigemitsu Suzuki (Mickey Curtis),  to get inside the remaining shell of their creation and pretend that it is still functioning normally. The old man wows attendants at the robotics show with his displays of dexterity and lifelike movement, seemingly able to do anything, causing the three engineers to panic that their ruse will soon be uncovered.

This light-hearted family comedy has a great premise which is amusing enough to carry a sometimes weak script. There are moments of slapstick humour with most of the jokes deriving from the public’s ignorance of the old man inside the robot suit. Mickey Curtis, playing the elderly Suzuki, does a great job with the character, who is shown to be struggling with modern life and feeling a little abandoned by society. The three engineers (played by Gaku Hamada, Junya Kawashima and Kawai Shogo) also have some great moments. We also follow a young engineering student (Yuriko Yoshitaka) who is obsessed with the marvellous robot, and members of Suzuki’s family. I found that it was an entertaining film, very similar to others in the genre (director Shinobu Yaguchi’s other films include “Waterboys” and “Swing Girls”), with a fun story and central performances, although some of the sub-plots are only very briefly addressed with the film’s main focus being on the jokes.

Despite being a knockabout comedy, the film also involves an emotional heart in the portrayal of the elderly Suzuki. We see him largely ignored by people around him due to his advanced years, and when he gets inside the robot suit there is an interesting dynamic as he is beloved by everyone and highly entertaining, but nobody sees him. A fantastic reflection of society valuing youth over age, further highlighted with the advancement of robotic technologies making people partially obsolete. I would recommend this film as an easy watch with a few great comedic moments.