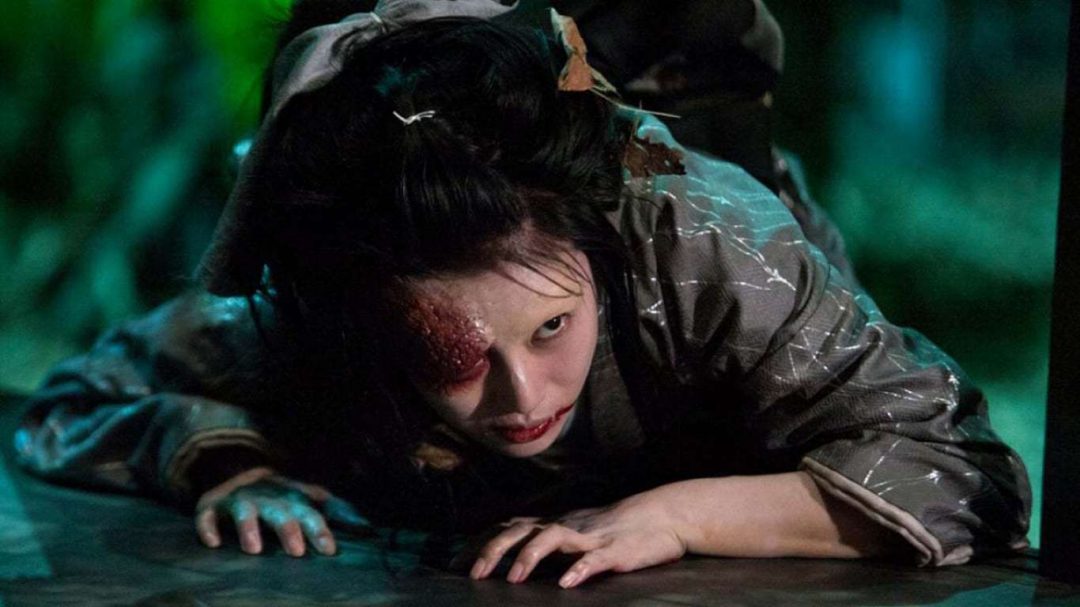 Dreams and reality begin to merge during preparations for a stage production of a popular ghost story. Miyuki (Ko Shibasaki) and Kosuke (Ebizo Ichikawa) are playing the lead roles of Iwa and Iemon in a production of “Yotsuya Kwaidan”, one of Japan’s most famous ghost stories. The story is one of infidelity and revenge which seems to have a peculiar resonance with Kosuke’s own life as he begins an affair with another actress. He starts to experience strange visions as Miyuki’s behaviour becomes more erratic.

“Over Your Dead Body”, written by Kikumi Yamagishi and directed by Takashi Miike, focusses on the central story of “Yotsuya Kwaidan”. While the story is famous in Japan, it may not have the same resonance in other parts of the world. The film assumes a certain degree of knowledge of this tale, showing large parts of the play they are performing and scenes that are not always explained or run consecutively, which can make little sense if you don’t know who the protagonists are or what is happening. The sequences of the performance are so beautifully shot on exquisite sets that you could quite happily have watched the play itself without the modern take on it. “Yotsuya Kwaidan” features a vengeful female spirit who seeks justice for her untimely death on her former lover. This film takes that premise and mixes in the idea that the actors are going through the same story as the characters, again in the expectation that you are aware of the original. The music by Koji Endo features traditional instrumentation of string and percussion that creates that eerie ghost story feel. It is rarely excessively gory instead relying more on creepy moments such as the slow realisation of a figure standing in the dark, or unnatural occurrences.

Life imitating art is an interesting theme, but unfortunately the film doesn’t make the most of its premise. In utilising so much of the stage performance of “Yotsuya Kwaidan”, while also telling the story of Kosuke and Miyuki we end up not really getting a satisfactory version of each, too little of the performance for it to make sense and too little of the actors to feel fully attached to their plight. Early on we see the various production staff watching the stage, but the film seems to offer little commentary on much of what is happening. That is not to say that it is not entertaining, there is plenty here to thrill fans of sinister ghost stories, and it is a unique way to tell the story, but it fails to go deeper than pure entertainment.