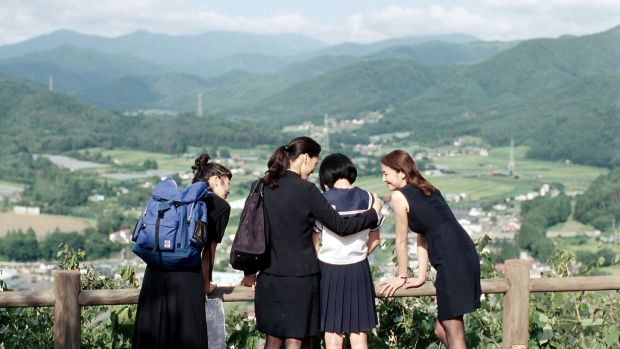 Sochi, Yoshino and Chika are three sisters who live together in a large house in a seaside town. Abandoned by their father 15 years ago after an affair, they have settled into a relaxed existence, when news of their father’s death and impending funeral reach them. On attending the funeral they meet their younger half sister, Suzu, for the first time and invite her to live with them. Suzu decides to move town and live in their house, beginning a new school and new life with her older sisters. The story shows us a little of each of their lives and how they work together to support each other.

Written and directed by Hirokazu Koreeda (I Wish) the film moves at a relaxed pace with a sense of realism, shying away from melodrama, as we see the everyday trials of the sisters. Their interactions seem perfectly natural, helped by the fantastic acting of all the leads and supporting cast, Haruka Ayase, Masami Nagasawa, Suzu Hirose and Kaho. The characters are all likeable with distinct personalities. Rather than watching a standard plot unfold, instead it feels as though we are simply spending time with them, as we see them cooking, eating, working or at school, and it is intriguing to see what happens. Each character is given their own arc and the film is paced to give everyone just enough time to develop. The direction is likewise calm and measured, with beautifully composed shots, and the fantastic settings, such as the old house and the seaside town, used to full effect in capturing a sense of place.

A subtle examination of family life and sisterly affection. Amazing direction and acting make this an enjoyable experience.