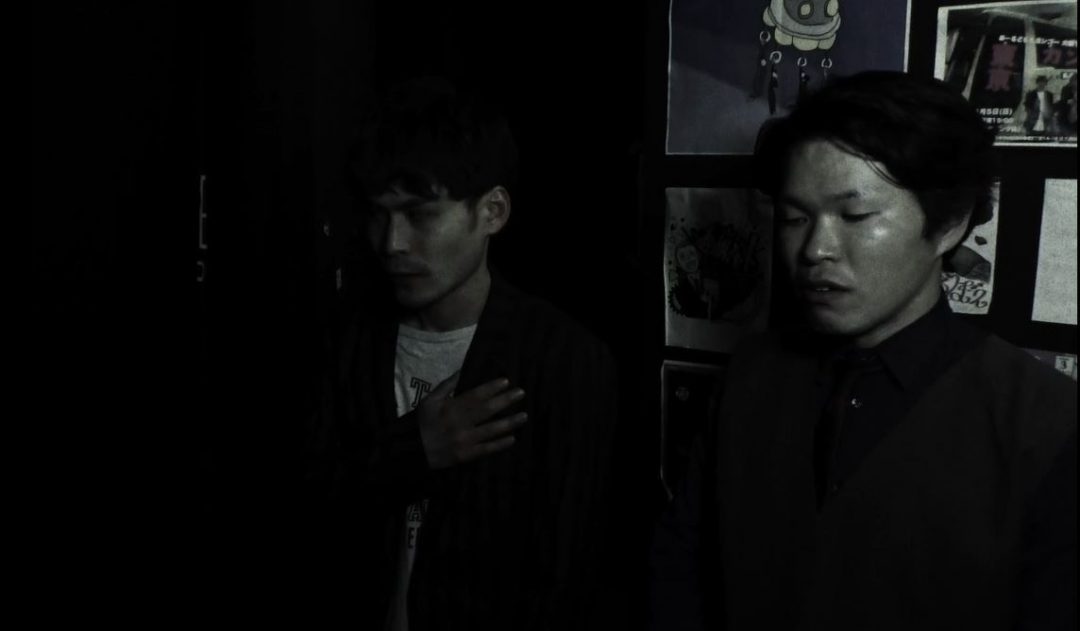 A manzai double-act called “Ashtray Brothers”, who specialize in off-colour material see their relationship fall apart in this bleak drama. The duo are banned from performing at a club as their act is unsuitable for most customers, with subjects ranging from family murder, rape, and other perversions. The writer Tsukaguchi (Saimen Tatsutaka) is determined to perform manzai in his own way, as rude and abrasive as possible. Following one of their shows, Kunimatsu (Kuregonta) is offered a job performing on television if he works alone and cleans up his act. This once-in-a-lifetime opportunity is the polar opposite of what Tsukaguchi seems to want for the pair though. Tsukaguchi’s alcoholism and womanizing soon lead him to conflict with his girlfriend too, and he soon starts to see his life unravel before him, consumed by anger and jealousy, as his friend and girlfriend desert him.

Written by director Kenya Okubo and lead actor Saimen Tatsutaka, “Manzai Conflict” is a difficult watch due to an unremittingly bleak tone and an unlikeable protagonist. Tsukaguchi has almost no redeeming characteristics, bullying Kunimatsu, mistreating his girlfriend, stubborn, violent and narcisistic. The film itself seems to delight in being transgressive and offensive. The long manzai set that begins the film features the two men performing their routine to no audience noise, leaving an uncomfortable silence for the viewer to watch this increasingly disturbing act, almost willing you to get up and leave yourself. It must be admitted that Saimen Tatsutaka’s gives a stunning performance, fully immersing himself in the despicable role, to the point where it is hard to dissociate the actor from the character. The other performances seem to feed off this energy, or cower from it, whipped around in the hurricane surrounding this one-man natural disaster. The film also features some excellent camerawork, with a grainy texture and grim atmosphere capturing the dark heart of the protagonist. The film has a short run-time at a little under 70-minutes and rattles along at a pace, really coming into its own in the latter half as Tsukaguchi’s mental state begins to deteriorate.

The main issue here is that the film lacks any real message. The narrative is challenging and transgressive in the same way as Tsukaguchi’s manzai act. Enjoying black humour is one thing, but when the protagonist seems to embody that same brutal misanthropy as his on stage persona it is very hard to have to watch. The film may have benefitted from showing more of Kunimatsu and Tsukaguchi’s girlfriend, to off-set this grim story and offer some contrast to the unremittingly depressing nature. However, that may be to miss the point of the film. If the intention is to provoke a response here, to have the audience feel something, even if it is stomach churning disgust or fist-clenching rage, then it is a success. The film forces us to witness this horrific individual, whose misplaced rage, egoism, and nihilistic outlook on the world see him spiral out of control. But without a counterpoint it often feels like more of a chore than a pleasure.