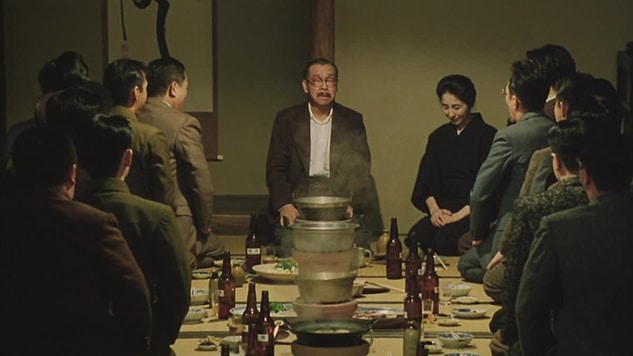 A professor of German at an all-boys school in Tokyo is taking his final lesson. He explains to the class that he is now able to make enough money from his books and has decided to give up teaching to pursue a writing career. He is self-deprecating, funny, and clearly  beloved of the class who hang on his every word. One of the students tells him that he is respected even by students who have left the school, still according him the title “teacher”. Following his retirement from the school, some students continue to call on him at home where they are welcomed in and treated to the professor’s humorous anecdotes and philosophizing. They decide to honour his birthday each year with a celebration that they call “Maadakai”, a play on words that sounds like the question “Not yet?” in reference to his longevity, to which the professor jokingly replies that he will respond “Madadayo” (not yet!).

Akira Kurosawa’s final film is a beautifully crafted portrait of aging, touching on themes of nostalgia, time, and loss, among other things. The film begins in the latter years of the second world war, when Japan was subjected to bombing raids, catching up with his story at intervals over the following decades. The film uses light and colour to great effect in emphasising particular moments, such as red sunlight indicating an auspicious moment. The professor mentions that he never sleeps with the lights off as he is afraid of the dark. He believes that those who are not afraid lack imagination and as such have a defect as a human. At the end of the film the camera moves upwards to a sky that shifts through several colours. Kurosawa was known to paint out his own storyboards and as such colour has a deep significance in his work. One of the standout moments of the film comes when we see the professor and his wife in their small home, following the destruction of their own, as the seasons are changing. It is a wonderful moment, without any dialogue, as we see the slow passage of time with this couple.

Tatsuo Matsumura plays the professor perfectly. He is kind and charismatic, funny and intelligent. It is clear that he was born to be a teacher, as he is able to completely captivate his students with whatever he is saying. They look up to him as an ideal, while also gently ribbing him about his unusual way of thinking. The supporting cast are all great. Kyoko Kagawa plays the professors wife with understated compassion, clearly devoted to her husband. The main group of students are also interesting characters, clearly all having taken different paths in life, but with the same respect and admiration for their former professor.

The professor’s final decades coincide with Kurosawa’s early years as a film-maker and it is clear to see that there is a sense of nostalgia running through everything. The professor loves old songs and sayings and his peculiar sense of humour is something his students take particular delight in (such as his unique burglar protection system). We see this relationship between the younger and older generations as something positive, with them looking up in admiration. Perhaps this is Kurosawa’s way of paying homage to those who have gone before and according them the respect they deserve. Kurosawa shows his mastery of direction in the framing of each scene, in particular the many large group or crowd sequences when there is a turmoil of action and laughter. In working with these large groups he succeeds in multiplying the emotional impact of each moment as the students work almost as a singular entity either laughing or honouring their professor as a collective. The clearest example of this is when they come together, moving backwards and forwards as the waves of the sea to ask him “Maadakai?” during the first birthday celebration.

An elegant depiction of a man who is well-loved and respected, giving everyone something to aspire to. The film’s tender portrayal of the love that his former students still have for him is heart-warming to watch. The ideals of kindness, selflessness, and good humour are shown to be reciprocated by the students, and the film carries this uplifting message through to the end. A worthwhile watch that is packed with some very funny moments, a touching message about kinship and community, and bittersweet ruminations on growing old.