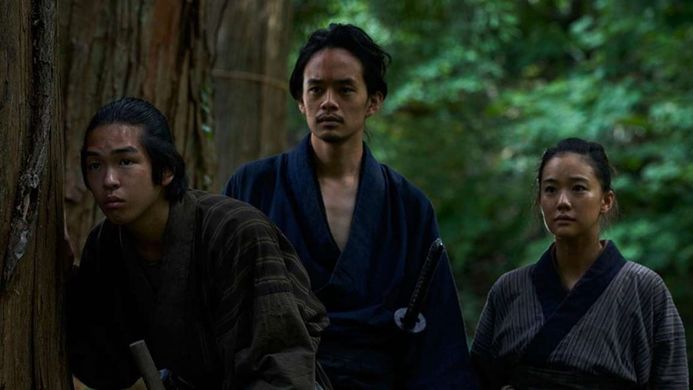 Mokunoshin Tsuzuki (Sosuke Ikematsu) is a samurai boarding in a village of rural farmers. He has a relationship with one of the women in the village, Yu (Yu Aoi), and spars with her brother Ichisuke (Ryusei Maeda) daily. Their peaceful existence is interrupted by the appearance of another samurai, Jirozaemon Sawamura (Shinya Tsukamoto), whom they witness defeating another man in a duel. Sawamura conscripts the Mokunoshin and Ichisuke to join him on a trip to Edo and Kyoto, which they agree with, Mokunoshin reluctantly and Ichisuke happily. Sadly, their plans are disrupted by the appearance of a group of ronin whom the villagers fear are there to rob them. Events soon turn violent and Tsuzuki is caught up in a world of death that he had avoided until then.

Written and directed by Shinya Tsukamoto, “Killing” is on the surface a simple samurai story, though with a dark subtext. The sets and costume design are perfectly evocative of the period and the score by Chu Ishikawa compliments the action perfectly with drums and traditional instrumentation. Where the film strays from the well-trodden path of other samurai dramas is in its arthouse aesthetic. The story is pared back to its essentials, that is to say it is about the taking of life and what this means for the person who does it. The sword-fighting and sparring sequences are well-choreographed and have a fluidity and intensity that makes them a joy to watch. When real swords are used, the film does not shy away from blood spatter and some wince-inducing injuries. There is also humour, often darkly comic, employed to great effect. Tsukamoto is a director with a unique style and will often use a conventional idea in an unusual way. One example is in a scene between Tsuzuki and Yu, that is both tender and erotic without being explicit. It also, as with many other scenes, manages to capture wordlessly yet perfectly exactly what the relationship is between the characters. Dialogue is often sparse with the performances speaking for themselves and the cast do an excellent job with their roles. Ikematsu is brooding and troubled with the path he is set on; Yu Aoi is a tough foil for him, the emotional mirror to the seemingly cold samurai characters. Tsukamoto himself is suitably intimidating as the deadly swordsman, almost personifying death itself. Certain stylistic flourishes, such as darkening the camera, are used sparingly but to great effect throughout. The film’s simplicity may not appeal to everyone, but it allows the themes room to breathe and allows the audience to experience the emotional turmoil of the characters without the need to follow excessive characters or subplots.

As the title suggests, this is a film about killing. Tsuzuki is a man who shies away from violence. His life in the village, despite daily training, is an easy one and he appears comfortable. Sawamura’s appearance is almost like a dark spirit descending on the villagers. The notion of a spirit becomes more apparent at the very end of the film as an unseen force seems to be drifting through the forest searching for its next victim. Sawamura tells Tsuzuki that to not use his sword makes it meaningless. He exists to kill. In this way Sawamura represents the very evil of murder itself, appearing in this rural idyll and setting of a catastrophic chain of events. “Killing” also discusses the theme of revenge, whether it is ever justified and whether a cycle of revenge can ever be broken. ‘Kill or be killed’ is an oft used phrase, but this film exposes the horror of the sentiment in recognizing that there is no good option. Of course, most would consider killing to be preferable, but that leads to a loss of self that is almost as devastating as being killed. “Killing” examines this moral conundrum in a way that leaves a lasting impression, building to a darkly satisfying climax. The film is a philosophical take on the popular samurai genre that dissects what it means to kill and whether killing strips us of our humanity.