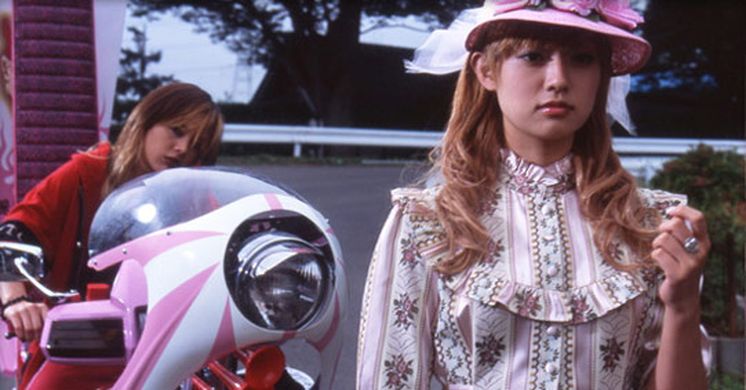 Momoko (Kyoko Fukada) is living in a small rural village and has few friends. Obsessed with 18th Century France she dresses in frilly clothes, in the style known as ‘Lolita’. After her parents separated when she was young, her father began selling knock-off “Versach” merchandise. When his gangland past catches up with him they move to the prefecture of Ibaraki north of Tokyo. Momoko appears content to isolate herself from others, focussing on her fashion and saving money to buy clothes from her favourite store in Tokyo. Her peace is shattered when she decides to raise money by selling of some of their old fake clothing stock. The arrival of the rough and tumble biker Ichiko (Anna Tsuchiya) is a shock to the well-mannered Momoko. But Ichiko seems to grow fond of her, repeatedly appearing at her house, and soon the unlikely pair form an unlikely bond.

“Kamikaze Girls” is based on a novel by Novala Takemoto. Takemoto is also a fashion designer who has designed clothes for the label “Baby the Stars Shine Bright”, which happens to be Momoko’s favourite store in Tokyo. The film is directed by Tetsuya Nakashima (Confessions, World of Kanako), who does a fantastic job with the hyperactive teen aesthetic. The film is fast-paced, with intercutting sequences, flashbacks, and animation creating a colourful and chaotic world. It’s garish tone and in-your-face style are completely in keeping with the characters and story. While “Kamikaze Girls” certainly puts comedy before anything else, it never loses sight of its two protagonists. Momoko and Ichiko are the heart of the story, with their chalk-and-cheese personalities providing much of the impetus for the action. One is resigned to a life of solitude, while the other seems terrified of being alone. The performances by Kyoko Fukuda and Anna Tsuchiya are exceptional. Tsuchiya is outrageously boisterous as the biker, and Fukuda’s prim and proper Lolita is a great take on the stereotype. Both seem to be enjoying their roles and have good chemistry. Also giving an enjoyably quirky turn is veteran character actor Kirin Kiki as Momoko’s befuddled grandmother. Though entirely different you sense that their friendship is genuine. The music in the film is by Yoko Kanno (Ghost in the Shell) and underscores the visuals perfectly with a rock-pop vibe.

“Kamikaze Girls” is a fairly straightforward tale of friendship. Taking two young women with starkly different interests it shows how they can come together. The film delves a little into the background of each character, with dysfunctional home lives and bullying leading them down their respective paths. While this doesn’t overshadow the comedic tone of the film, it does offer some contrast to what is otherwise a lighthearted romp. The film also looks at the importance of socialisation for establishing a sense of self. Both characters are in their own way living an unbalanced life, drawn towards a particular subculture that gives them little sense of individual identity. One cannot form connections with others, while the other seeks out any kind of companionship even when it leads to her own corruption. Through each other they discover that it is important to broaden your horizons and look beyond your own narrow interests. Their relationship may seem unlikely at first due to their lifestyle choices, but it becomes apparent that they are both looking for the same thing in a trustworthy friend. “Kamikaze Girls” is a lot of fun to watch with a fast-paced story, likeable characters and a great sense of humour.