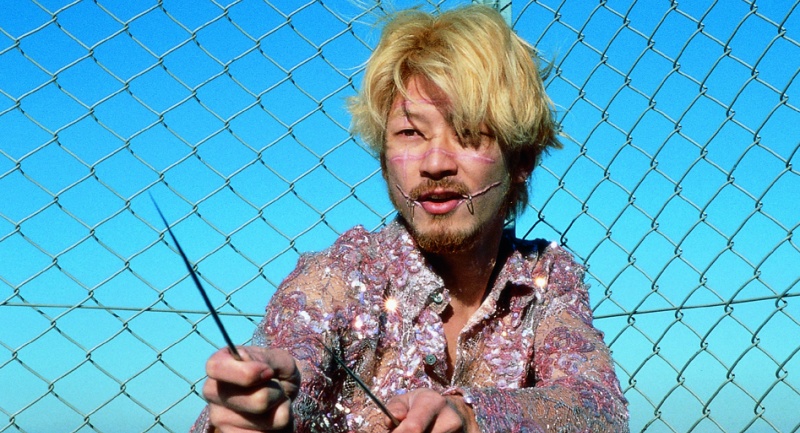 A masochistic mobster and a sadistic assassin are pitted against one another in this gory crime story from Takashi Miike. When a yakuza boss goes missing, his chief enforcer Kakihara (Tadanobu Asano) goes in search of clues. Kakihara has violent sado-masochistic tendencies, as we can see from the numerous scars across his face, his mouth being a wide slit held together with piercings. Kakihara comes to learn that the killer of his boss was one Ichi (Nao Omori), a man who has been brainwashed into being a heartless killer, with sadistic inclinations. As they draw closer to a confrontation, we are given a series of gruesome, violent, stomach churning scenes in one of the finest examples of Japanese exploitation cinema.

Not a film for the faint-hearted or those easily repulsed by gory special effects, the director Takashi Miike blends cartoonish violence, horror, pitch black comedy, along with realism in an unsettling portrayal of the darker drivers of human behaviour. The film is based on a manga by Hideo Yamamoto and the characters feel very much like comic book heroes and villains that have landed in a gritty, crime-infested Tokyo familiar from many yakuza films. This sense of the fantastical is emphasised in the use of colour, Ichi’s superhero-like costume, and helps make the content more palatable. The direction moves from fast paced action to more sedate scenes of character interaction. There is definitely a chaotic punk feel early on, with jarring cuts and music, and a handheld camera racing through the neon-washed streets swarming with people. We also see high-angled framing and off-kilter action that brings out the comic-book feel and helps bring the audience into this anarchic world where anything goes and the only certainty is pain and violence. The film pushes the boundaries of good taste at times, with infamous scenes involving a severed tongue, reference to rape, domestic abuse, and scenes of torture. However, the film holds together as a solid crime drama, with the central narrative being easy to follow. A fantastic supporting cast includes Alien Sun, a Chinese prostitute; Shinya Tsukamoto as Ichi’s mysterious handler Jijii, and various gang members played by Sabu, Shun Sugata, Kiyohiko Shibukawa, and Suzuki Matsuo who plays twins Jiro and Saburo.

It would be easy to dismiss this film as a violent, gory thriller, made with the intention of pushing the audience to the limit of what is acceptable. For those willing to examine the film carefully, there are deeper meanings here. Ichi could almost be considered the Id, driven solely by violent and sexual urges, confused, struggling to establish some kind of morality in his disordered existence. Kakihara also appears as a metaphor for human desire for violence and suffering; he is a comment on viewers of this film, who wish to sit through something so uncomfortable, to be shown the absolute lowest, most grotesque imagery, in order for some kind of spiritual gratification. There are also numerous allusions to the relationship between violence and sex, familial relationships and the abuse of power that can occur within them. Both Ichi and Kakihara are products of their environment, deeply disturbed individuals who typify the dog-eat-dog mentality of society. Worth watching for the creative scenes of carnage, but also worthy of consideration at a deeper level.