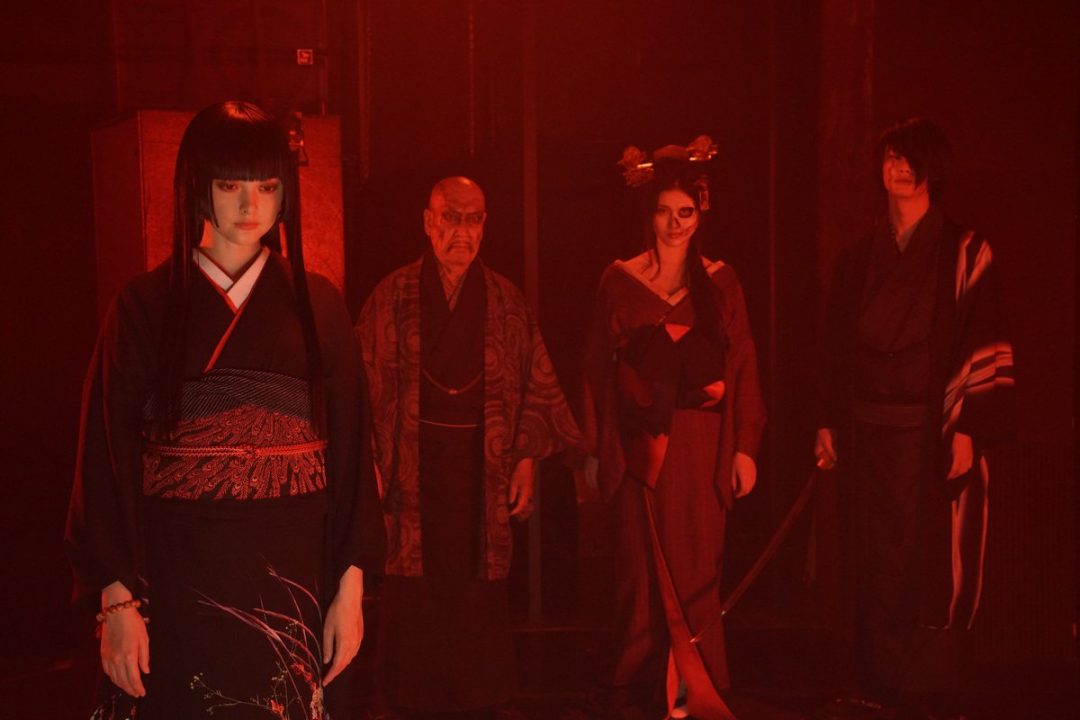 In 1965 a girl gets revenge on the school bully by calling on Hell Girl (Tina Tamashiro), an infernal avenger, and her fellow demons to take her to hell. These demons demand a terrible price however, as anyone who calls on them will also be taken to hell when they die. In 2019, the now elderly woman’s son, photo-journalist Jin Kudo (Kazuki Namioka), is asking to use this story for an article. The woman dies shortly after and the demons come to take her. When an idol, Sanae Mikuriya, (Mina Oba) is attacked by a crazed fan, leaving her with facial scarring, she also calls on Hell Girl (who is now contactable through a website; although only at midnight, and only by those holding a serious grudge). And later when Miho’s (Nana Mori) friend, Haruka (Sawa Nimura) falls victim to a dangerous black metal singer Maki (Tom Fujita), Hell Girl finds herself with another young woman willing to take this demonic bargain.

“Hell Girl” is based on the anime by Takahiro Omori, with the live action film being written and directed by Koji Shiraishi (Carved: The Slit Mouthed Woman). The film’s central premise, of an infernal ‘deal with the devil’ in the form of the revenge service offered by ‘Hell Girl’ is pretty solid horror fare, but unfortunately the film fails to capitalize on it. We rarely see the hellish tortures the victims are subjected too, with only a minimal look at one character being eaten by worms. This means that for the most part the threats of eternal damnation are not particularly terrifying. The tone is often more dark fantasy, with supernatural anti-heroes in the shape of Hell Girl and her band of demons. The film perhaps relies on some fore-knowledge of the manga, with none of these hellish characters fleshed out much, and even Hell Girl herself rarely making an appearance. Later in the film they seem to appear even when not summoned, and they seem to take little joy in their work, simply taking any soul they are asked to. This lack of characterisation is also apparent in the human protagonists, who either have no meaningful motivation or are unlikeable enough that their characters’ fates are no great cause for sadness. The seemingly tit-for-tat, and thoughtless nature of them calling up Hell Girl for revenge, becomes almost risible, requiring no effort and with too few obvious consequence shown to the audience. The film gives us brief glimpses of a psychedelic hell, a teen-friendly Teruo Ishii fairground that is always careful not to be too extreme, limiting itself mostly to decapitation, and where the demons conform to comfortable horror tropes (scars, dark clothes).

“Hell Girl” is a by-product of a successful anime and manga franchise, which doesn’t move much beyond its premise. The demons go through the motions of taking people to hell in a way that give the audience little cause for concern about its protagonists. With more character work and creative depictions of hell it could have worked, but unfortunately it fails to entertain.