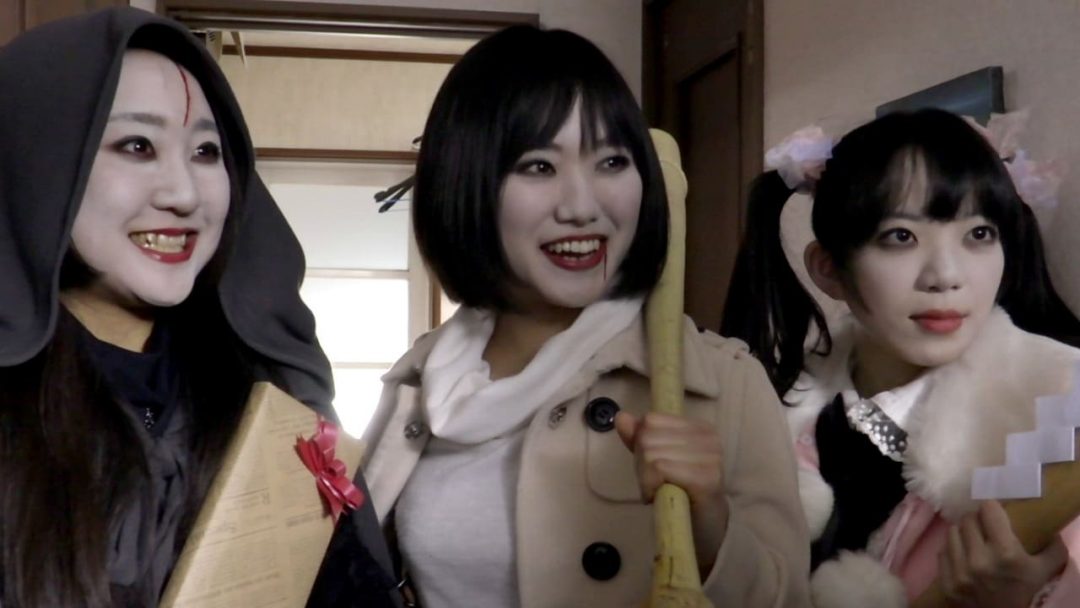 A team of ghosts come to a young woman to ask for her help in getting revenge against their murderers in this slapstick horror from Noboru Iguchi (Dead Sushi, Mutant Girls Squad). Rika (Anna Yanagi) is gifted with the ability to see the dead. After splitting up with her boyfriend, a trio of ghosts appear to cause havoc, beating up this man on her behalf. They explain to her that people living on the cusp of life and death, such as her, are able to see the ghosts. These restless spirits are also able to draw her life energy, somewhat inexplicably, by kissing her. We learn that all of these ghosts were murdered and are seeking restitution. Keiko (Sumire Ueno), a schoolgirl who was killed before being able to give her father his birthday present; Akari (Minori Mikado), a cutesy twin-tailed teen, who acts like a puppy when she gets excited; and Yoshie (Yuni Hong), whom Rika had previously believed was her (living) friend. They are later joined by Naomi (Asaka Nakamura), a spirit guide and trainer, who helps get the team in shape for taking on their adversaries, a group of gangsters in the town responsible for their torture and deaths.

This comedic horror is lighthearted for the most part, albeit with dark and serious undertones of rape and murder of young teen women. As with Noboru Iguchi’s other works, it is fun to see these capable female protagonists getting even with the reprehensible men who cut their lives short. The energy and enthusiasm of the actresses makes the most of a ridiculous script. The cast go all out with the material, flinging themselves gleefully into their roles. They have excellent comedic skills, managing to pull of the puerile sight gags and remain straightfaced while reading a script packed with bizarre moments. However, when the film does dip into more emotional territory they prove themselves more than capable, being completely captivating and creating a genuine sense of loss concerning their deaths. The direction is crisp and clean, helping maintain a bright and cheerful atmosphere, and there is fun, cartoonish CG with the ghost energy effects. Iguchi is also known for crude, disgusting, practical effects work, but this film is tame by comparison to others, with scenes only occasionaly featuring body horror. Hints of exploitation cinema are also limited to the girls kissing and one egregious scene with an actress stripping down to her underwear to have an ‘air shower’. As with “Dead Sushi” it occupies a peculiar situation, with the style, characters and humour being almost straight from a children’s film, while the focus on rape and murder, and the occasional gruesome effect could not be considered child friendly. This seeming mismatch between tone and content will be familiar to those who have seen other works, adult themes with childish sensibilities.

“Ghost Squad” is a fun comedy-horror but nevertheless has genuine heart. The trio of ghosts are sympathetic due to their traumatic ordeals and having their lives taken away long before their time. Amongst the comedy and chaos of the story we have several moments that delve into some dark and difficult reflection on such crimes. The film asks us to consider not only the suffering of the victims, but the adequacy of the justice system that allows men to perpetrate such crimes with immunity or limited punishment. It also questions whether there is any possibility of redemption and what the role of revenge is in society. However, the film’s central thematic focus is on the tragedy of the victims, who have lost the most important thing: life; and also to realise how precious life is in a world where it can be easily taken away.