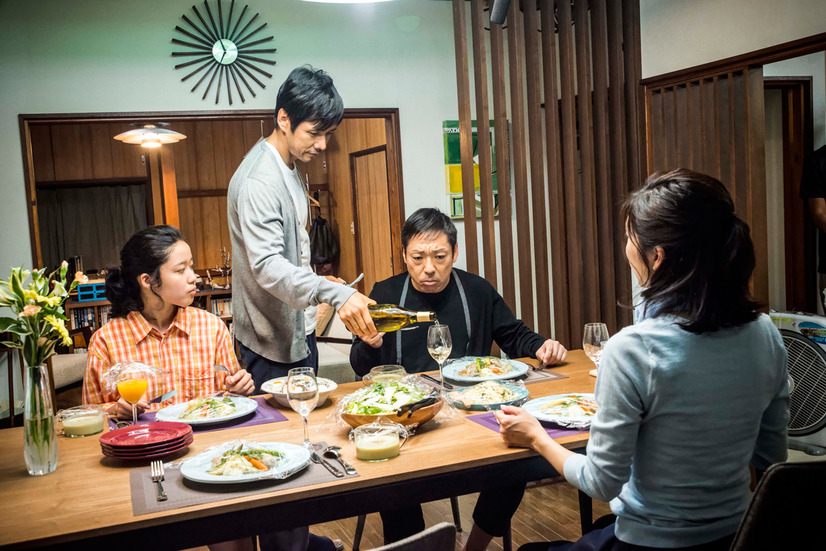 A retired police officer, Koichi Takakura (Hidetoshi Nishijima) working as a lecturer is brought back into his old job when he learns of a mysterious unsolved crime. The crime involves the disappearance of three members of a family, leaving only a young daughter. Takakura has recently moved into a new house with his wife Yasuko (Yuko Takeuchi) and their dog. When the couple make a courtesy visit to their neighbour they meet the unusual figure of Masayuki Nishino (Teruyuki Kagawa). The man seems unusual, but the two ignore it. However, his behaviour soon leads Takakura to suspect that Nishino may not be all that he seems.

The film is based on a book by Yutaka Maekawa with a screenplay by director Kiyoshi Kurosawa and Chihiro Ikeda. The plot begins as a simple crime mystery but morphs into a psychological horror. It is clear early on in the film that Nishino is a suspicious character, and this is made explicit before too long. From there the film becomes a nightmarish situation for Takakura as he faces his greatest fear: of being helpless or unable to stop terrible things happening. Kurosawa creates a tension throughout the film using uncomfortable scenarios, particularly between Nishino and Yasuko. The blend of traditional detective drama and horror is subtle yet engaging with an unexpected twist partway through. Hidetoshi Nishijima and Yuko Takeuchi are believable as a couple with relationship troubles bubbling under the surface. Teruyuki Kagawa is impressively sinister as Nishino, often needing no more than a look or a word to give off a sense of uncertainty about his motivations.

“Creepy” transforms a typical detective story into something that plays on primal fears in a way that is unique and highly unnerving. In the opening scenes of the film Takakura allows a man under interrogation to escape and he subsequently commits a murder. This failure haunts him throughout the film. It is a feeling of powerlessness that is terrifying. The film manipulates many events to this end which may lead to accusations of plot holes and unbelievable scenarios. Understanding that the film’s focus is not on the surface level investigation, but on exploring Takakura’s own psyche is key to fully comprehending what is happening. When Nishino begins hitting on Yasuko and invites her to his house, it is representative of the atavistic fear of Takakura that he may lose his wife. This dynamic is brought back again later in the film when she is asked to choose between the two men. The film essentially becomes a struggle for dominance and control. One man appears to be losing his power to control his life and events surrounding him, while the other seems able to commit almost any act without consequence. There is also a dark undercurrent of inexplicable evil, reminiscent of other Kurosawa films such as “Cure”. Takakura tells his students that there are several kinds of killer; and that sometimes there is no explanation for their crimes. This is the most horrifying thought of all: that there are things out there that we cannot understand and therefore cannot control. An interesting take on the detective thriller genre with more going on just under the surface.