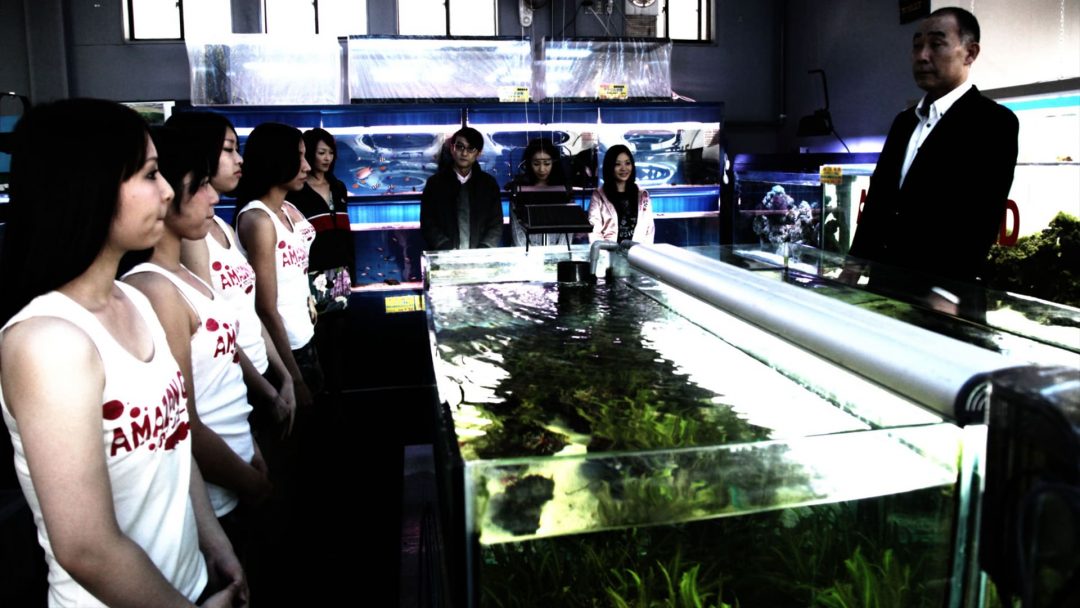 Nobuyuki Shamoto (Mitsuru Fukikoshi) is the owner of a small fish store. Together with his wife, Taeko (Megumi Kagurazaka), and wayward daughter, Mitsuko (Hikari Kajiwara), they maintain a fairly unimpressive existence. When his daughter is caught stealing from a supermarket, she is helped out by Yukio Murata (Denden), a rival fish store owner who offers her a job at his store. Murata is comical, arrogant, outgoing, everything Shamoto is not. But soon things take a turn for the worse when Shamoto discovers that Murata’s jolly façade hides a much darker, violent character.

The film is well written with the mysteries surrounding Murata and the psychological and physical violence building to a screaming crescendo in the final act. It is far from an easy watch, with scenes of rape, abuse and very graphic scenes of dismemberment, but with director Sion Sono’s trademark black humour running through it. The main actors are fantastic. Fukikoshi does a great job of portraying the timid, disgusted Shamoto, and he does an incredible job of making this unimaginable transformation believable. The unhinged couple of Murata and his wife, a delightfully unhinged performance from Asuka Kurosawa, are also genuinely chilling with sudden changes from bright humour to dark violent moods. The film is long but almost every scene, whether the visceral, violent murders or the sharp dialogue are riveting. Shiya Kimura’s cinematography is stunning and the film almost revels in creating something beautiful out of a subject matter that is dark and nihilistic. The music by Tomohide Harada helps increase the sense of danger and draw you into the film.

“Cold Fish” may appeal to lovers of gore and exploitation cinema, and there is no shortage of shocking scenes, but, the film also expresses an underlying philosophy of alienation and nihilism that means the violence is far from gratuitous. The dissociative, sadomasochistic characters act in a world where the violence serves to puncture a sense of ennui which plagues them otherwise. The film offers no easy answers with the finale being an increasingly sickening display of human psychopathy. If you are a fan of this genre of blackly comedic, hyper-violent thrillers, then this is definitely a recommended watch. Enjoyably disturbing film.