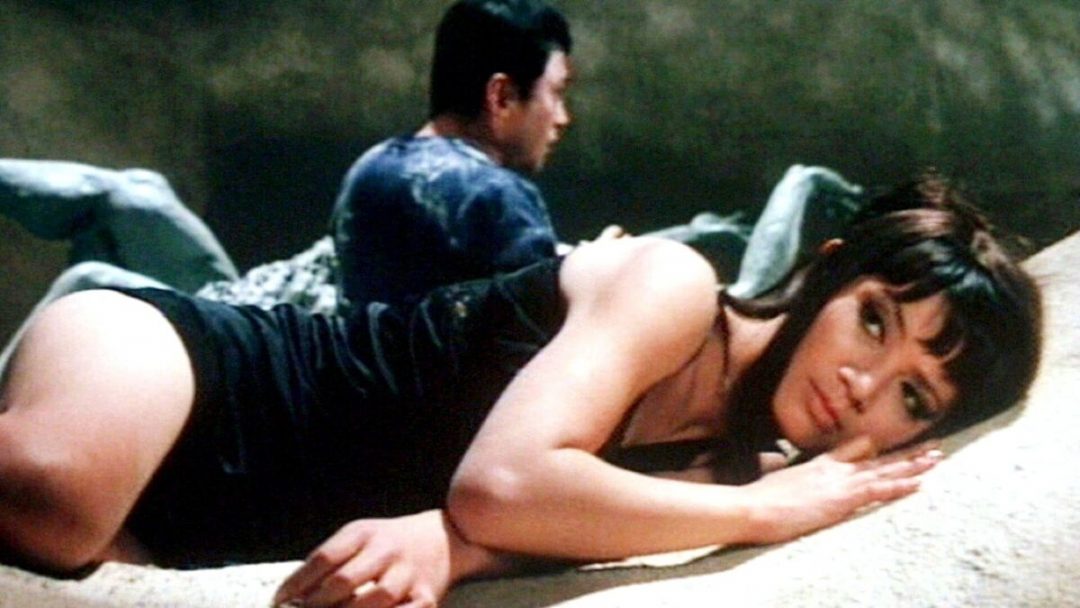 A kidnapping victim begins to sympathise with her captor in this tale of moral degeneracy and sado-masochistic lust. Aki Shima (Mako Midori) is a model who has recently found fame as the subject of an exhibition of erotic photography and sculpture by a famous artist. While visiting the gallery she sees a blind man running his hands over the statue of her, an eerie sight that causes to her to flee. She is later abducted by this man, Michio (Eiji Funakoshi) and his mother (Noriko Sengoku), and taken to a remote warehouse. This warehouse is Michio’s studio, where he sculpts body parts. Born without sight, he intends to use Aki as a model for a new work of art, one born of the sense of touch. After a few failed escape attempts, Aki finally gives in to Michio and the two later begin a sado-masochistic physical relationship that grows increasingly violent as they attempt to push the boundaries of pleasure and pain.

Based on a story by the master of skin-crawling horror Edogawa Rampo, “Blind Beast” is a film that confronts the audience with a creepy, and subtly terrifying scenario. When we see Michio caressing the statue, and later Aki herself, there is something unseemly about it, making real the metaphorical objectification of the female form. The story is pared back to provide a simple yet effective horror tale, featuring only three actors and largely taking place in the same large warehouse studio. Mako Midori’s Aki Shima is a sympathetic heroine, making attempts to flee, wilful and yet drawn irresistably into the moral void of Micho’s world. Eiji Funakoshi is a sinister villain, playing the unassuming psychopath role with unnerving charm. The main setting of the film, the warehouse-cum-studio is an almost fantastical space, the walls hung with large sculpted noses, eyes, and limbs, and the floor taken up with a giant model of a naked woman. This focus on the body and human form makes us aware of every itch and tingle, every spine-chilling or toe-curling moment emphasised by the fact we are trapped in Michio’s world of physical touch. This is helped by the excellent direction of Yasuzo Masumura, utilising shifts into deep black to depict both Michio’s blindness and depravity. Hikaru Hayashi’s score is features strangely romantic melodies that make us question what is happening between the protagonists as they sink into debauchery and violence. “Blind Beast” avoids graphic depictions of what is happening, cutting away from the worst moments, while at the same time blending the emotional and the physical to the extent that the audience has no choice but to feel each cut as they begin their journey of sado-masochistic excess.

Michio is a typical horror villain, sexual repression leading to deviancy, his Oedipal relationship with his mother, and apparently preternatural abilities to hunt his quarry by smell and sound. However, Michio can also be seen as a stand-in for male lust and moral degeneracy in general. His single minded pursuit of Aki, his attempts to capture her and reproduce her form, to contain her, provide metaphorical potential for those looking to draw societal messages from the film. Likewise, Aki is a symbol of female emancipation, turning her body to her own financial gain, strong-willed, independent, and cautious, she is far from a helpless heroine. In its final third the film begins to delve into far more Freudian territory, moving fully away from a sense of realism as Aki loses her sight and becomes a counterpart to Michio, engaging in acts of hedonistic abandon and mutual destruction. “Blind Beast” questions human desire and posits an inevitable tendency towards violence and death, drawing out timeless themes of Eros and Thanatos in a film that creates a powerful atmosphere through stunning acting and direction. There is something mythological about the horrifying finale that will stay with you long after the film is over.