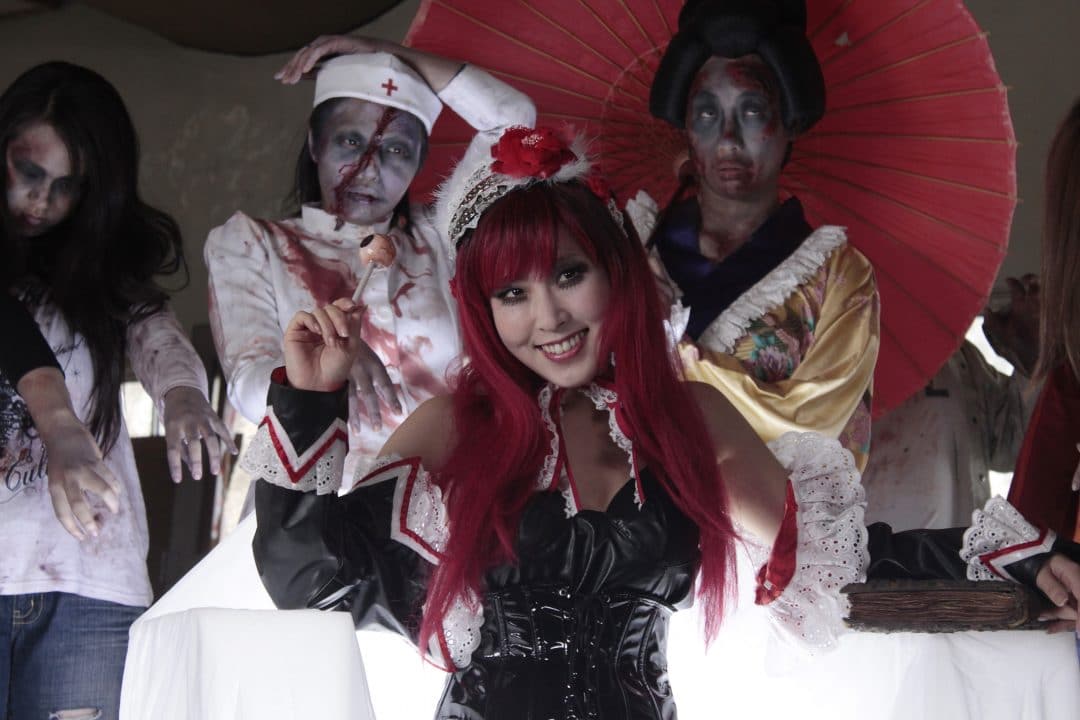 When a film has a title like that you are really only watching it for two reasons. Written and directed by Takao Nakano, “Big Tits Zombie” is based on the manga by Rei Mikamoto and stars several adult film stars in what is a low-budget comedy horror romp. Beginning in media res we see two of our heroines (Sora Aoi and Yumi Yoshiyuki) surrounded by zombies, hacking their way through with a katana and a chainsaw. Lena (Aoi) then kindly offers in voiceover to take us back to where this all began. Having just returned from Mexico, Lena is looking for work and finds it in the “Paradise Theatre” stripclub. Working alongside her are Ginko (Yoshiyuki), Maria (Mari Sakurai) who has a goth-loli style and love of Shakespeare, Nene (Tamayo) who is into reading tarot, and Darna (Io Aikawa) from south Asia who is raising money for her family back home. With few customers the women are bored. They are then farmed out to the local onsen spot to entertain the patrons there with female wrestling and other games. Following a fight in their dressing room, they discover a hidden passage behind a wall that leads down to an underground chamber. The chamber contains many occult books and a portal to hell. Because why not? When Maria begins reading an incantation from one book she unwittingly summons the dead back to life.

The film is as ridiculous as the title suggests and doubtless nobody involved was expecting a masterpiece. The manga “Big Tits Dragon” by Rei Mikamoto on which the film is based no doubt gave more weight to the film through giving each character some sense of personality. There is an attempt to give Lena some backstory and character development, even if it largely involves her getting drunk and having regrettable sexual encounters. The others are likewise all given a peculiar character quirk. Darna’s love of money and Maria’s gothic obsession are traits that do tie into the story in interesting ways, and it is more than you might have expected for anything to make sense in this film. One of the oddest moments of the film is a flashback involving Ginko, where she explains how she previously killed one of the zombies after he broke into her home and killed her younger sister. This subplot doesn’t really come back in any major way, which is a missed opportunity.

Speaking of missed opportunities, while there are plenty of zombies in the film the titular breasts make relatively few appearances. The sequence near the end where they have breasts sprayed with arterial spurt from slain zombies one would imagine would be a common occurrence in the film, but it plays as though it is intended as a scene inserted simply to justify the title. This wouldn’t be an issue were it not for the fact that the filmmakers rarely seem to make use of their biggest assets, that being the great cast of actresses he has. The script has several decent jokes, but too few to really class this as an out and out comedy. When they meet a blue ogre from hell who is in middle-management and complaining about the number of souls he is having to contend with, a little like an overpopulated prison as he remarks, the scene feels underplayed. Likewise, there are many creative moments, such as a woman having her organs eaten in the style of ‘body sushi’, playing ping pong with an eyeball, and a woman whose organs flail around like tentacles, that suffer through poor effects work. The last of these is severely damaged as you can see the strings holding up the puppetry. The flame-throwing vagina was one moment that absolutely caught the tone of the film, somewhere between horror and comedy, but it needed to push the envelope in this vein more often.

Sadly, the film falls between two stools. Neither raunchy or terrifying enough to be a standout of the ‘ero-guro’ genre, nor funny enough to be a great comedy. It’s short runtime means it is sure to find an audience looking for some B-movie goodness, but again the filmmakers really missed a trick in not going all out either in terms of the sexploitation or horror to make this truly memorable. It is to their credit that they attempt a modicum of plot and character and there is enough to keep you entertained, but it could have been so much more.