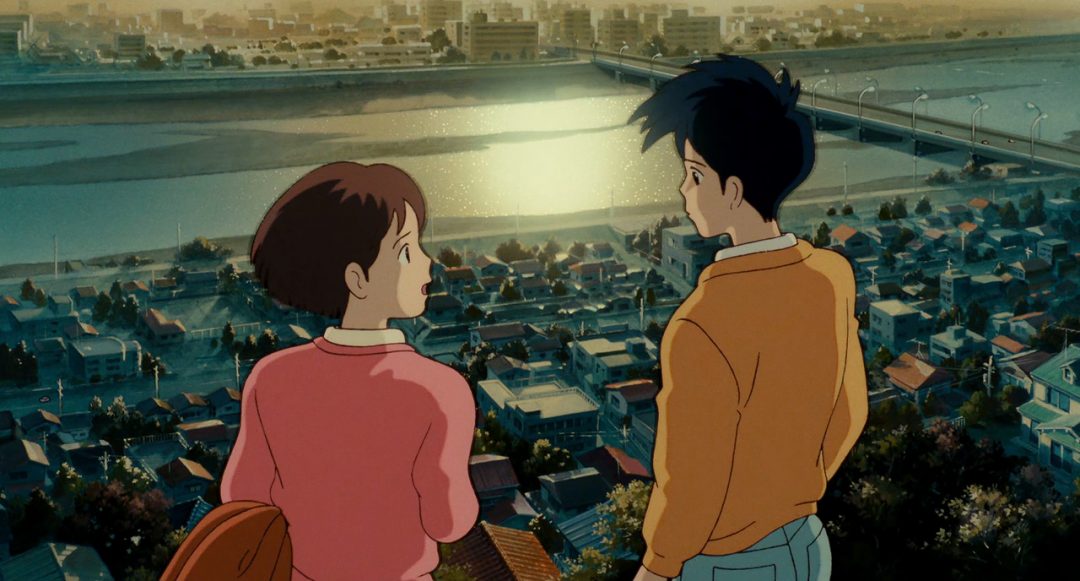 Whisper of the Heart (1995) by Yoshifumi Kondo

Childhood romance blossoms in this light-hearted Ghibli film directed by Yoshifumi Kondo. Bookish schoolgirl Shizuku (Yoko Honna) is intrigued when she discovers the same name on a number of library cards. She decides to find out who the mysterious Seiji Amasawa (Issei Takahashi) is and is surprised to learn that he is at the same school as her. Their fledgling romance appears doomed to be short-lived however when Seiji reveals his plans to travel abroad to become a violin maker.

Based on a manga by Aoi Hiiragi, with a screenplay by Hayao Miyazaki, “Whisper of the Heart” differs from the more fantastical Ghibli films in having an entirely real world, non-magical setting. It excels in bringing the studio’s incredible artistry to urban city streets, creating a wonderful sense of place, with extreme care taken in depicting the quotidian details of schools and apartments. From the opening panoramic shots of the city to the final credits where we see cars and people passing, incredible efforts have been taken to create a believable world with all its peculiarities. This sense of capturing reality rather than creating it is heightened by the humble direction, that never feels as if it showing off the incredible work of the background artists, but allows you to notice the small things as the action unfolds. The movie is largely set around a real-world location in Tama city, which is depicted beautifully in the animation, including the hills and mix of buildings and greenery that typify this kind of residential area.

Shizuku’s family apartment with piles of books and papers and all the great confusion of life packed in there helps to completely transport you. Likewise, the way shadows play over characters, or the reflection in train windows, each moment is packed with many subtle yet startling details that help build a tangible and enrapturing drama. Shizuku is a likeable protagonist, as with many Ghibli heroines she is defined by curiosity and passion, with her first charming romance being the perfect subject for a young audience. The pace can be sedate at times, with Shizuku’s story having few twists, instead it revolves around a number of ‘moments’ that manage to beautifully capture the feelings of the protagonists without ever stating them explicitly. Surprisingly perhaps for a children’s film there is much more subtext than story. Some of the best moments involve the antique shop owner, Shiro (Keiji Kobayashi), as he shows her an old grandfather clock, and the statuette of an elegantly dressed cat known as Baron Humbert von Gikkingen. The film will spend time over these quaint moments, allowing us to truly feel a sense of wonder at things that might otherwise go unobserved. This does mean that is a film that will be appreciated more by those who spend time considering these scenes and their meanings, as opposed to expecting to be guided through a generic romance plot.

“Whisper of the Heart” deals with themes of personal growth and sundered love. Precious gems buried deep under rock is used as an analogy for individuals discovering their particular talents or uncovering what is most meaningful to them. The first love experienced by the youthful protagonist is beautifully depicted in its faltering, unsure nature, the uncertainty twinned with an indescribable happiness. The poignancy of Shiro’s story about his own unrequited love, separated many years prior, is one of the most touching moments of the film. The film can also be seen as a commentary on the power of art, song, sculpture and the written word. Shizuku’s love of books, and Seiji’s love of music, along with Shiro’s passion for restoring antiques all speak to the important connections they feel with these things, that represent some eternal emotion of humanity: love. A subtle yet powerful love-story that speaks to deeper emotions of human connection and kinship.