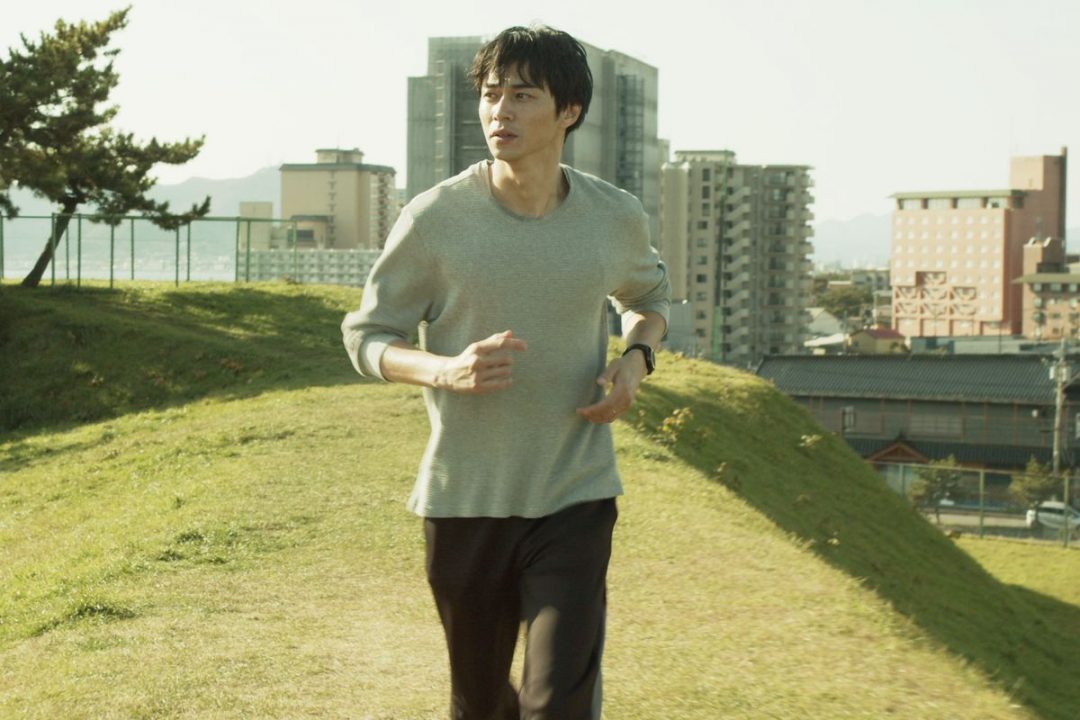 Kazuo (Masahiro Higashide) is taken to a psychologist after suffering a stress-related breakdown who recommends a break from work, medication and regular excercise. Kazuo soon takes to his new hobby of running, setting out on solitary jogs morning and evening every day. His partner Junko (Nao) is supportive but finds his low mood frustrating, a problem exacerbated by her pregnancy. Meanwhile, Kazuo’s friend Kenji (Shunsuke Daito) tries to help him as best he can. At the same time transfer student Akira (Kaya) is struggling to fit in with his classmates, finding friendship with another lost soul in the shape of Hiroto (Yuta Hayashi) and his sister Minami (Yuki Mine). The three youths often see Kazuo on his daily circuit, neither aware of the others problems.

“The Sound of Grass” is based on a story by novelist Yasushi Sato, who took his own life in 1990. It is often a difficult watch, its themes of depression and suicide amplified by a relentlessly oppressive atmosphere. The film opens with a long sequence of Akira skateboarding through the largely deserted streets of Hakodate, the port city where the film takes place, an impressive sequence that typifies the film’s superlative cinematography and direction by Hisashi Saito. With wide shots of the city, parks and port, we get a sense of place and reality that also work in harmony with the story, with the conflicting sense of life surrounding Kazuo being both immediate and remote. The audience is taken along with Kazuo as he runs around the city, crossing the large bridge, climbing the park steps, or circling the carpark. These sequences, soundtracked by an uplifting piano score, stand in stark contrast to the moments when he is at home or in conversation with others, that seem to lack energy. That may seem like a criticism, but it perfectly replicates the hopelessness and sense of stasis that typifies mental health issues such as anxiety and depression, as well as the fluctuation between highs and lows. His illness doesn’t express itself in wild outbursts but in a complete lack of energy or interest in things around him. Higashide gives an incredible performance as Kazuo, and his scenes with Nao’s Junko are heartbreaking to watch as these two characters, who clearly love one another are unable to traverse the vast unseen divide between them. The story of Akira, Hiroto and Minami, is almost a separate, yet parallel story, linked only by themes of isolation and suicide. Mental health can be difficult to depcit on film, without straying into cliche or exploitative exageration, but “The Sound of Grass” presents a realistic view of this issue that can go unseen and have devastating consequences.

In a more conventional film, you might imagine that Kazuo’s running would be the miracle cure to his illness; or that Akira finding friends would lead to an uplifting ending to comfort the audience. “The Sound of Grass” avoids such easy solutions, showing that mental health issues are not something that can easily be resolved by taking up excercise or talking to people, although both of these can be helpful in combatting the worse effects of depression. In its lack of simple answers, or comforting conclusions, the film offers a powerful, emotional, and discomforting depiction of depression. The naturalistic performances from the whole cast help to build this sense of real people with real concerns. What makes the film powerful is not that it is extreme, or shocking, but that it is painfully believable. Not an easy watch, but a worthwhile exploration of this important subject.