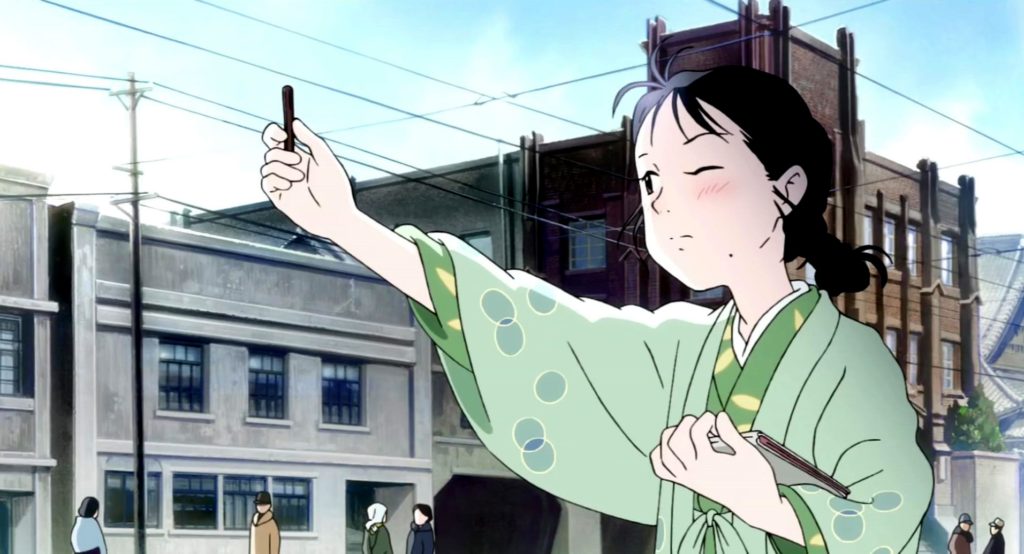 In this Corner of the World follows the story of Suzu, an absent-minded young girl, constantly daydreaming, and drifting through life quite contentedly for the most part. Born and brought up in Hiroshima in the 1930’s, she is fond of drawing and spends her days making up entertaining stories for her younger sister. When she comes of age, Suzu is married by arrangement to a man from Kure, a nearby town and moves in with his parents. As the Second World War begins to have an increasing impact on their lives, Suzu must navigate the various relationships and trials that she encounters. 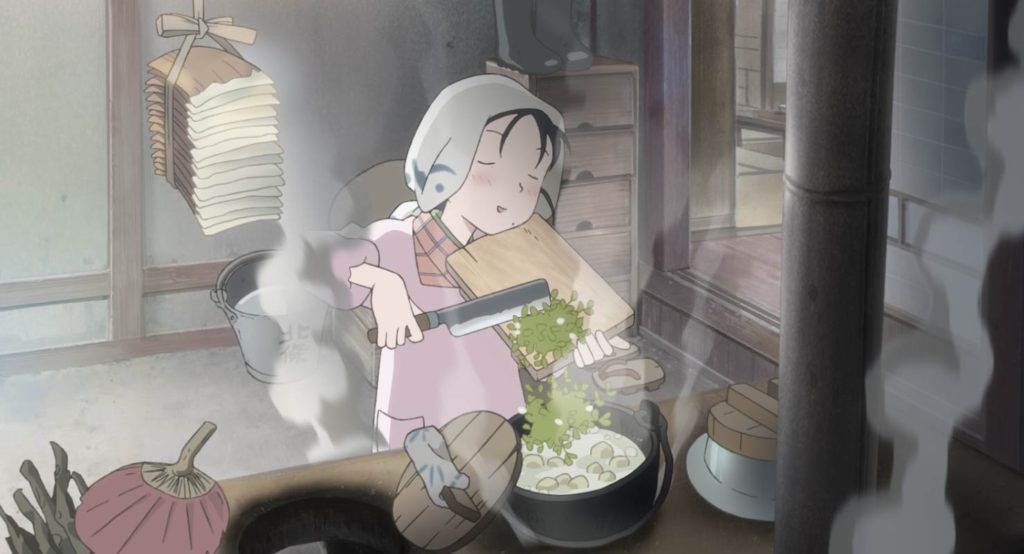 Directed by Sunao Katabuchi, the world of “In this Corner of the World” is a contemplative film about how ordinary lives are disrupted by war. Suzu is a likeable and sympathetic protagonist whom you can happily spend time with. Her daydreaming and escapes from reality are relatable and come to have a powerful significance later in the story. There is a gentle humour to proceedings, some subtle (such as her pondering the notion that caramel might soon cost 100 yen) which keeps the first half of the film quite light and enjoyable. While a story set during the war will never be entirely without tragedy, the film takes an interesting approach to the war. It looks at the everyday activities of a family that are interrupted by the war intermittently, a dark blemish on their rural idyll. There is the traditional Japanese focus on the passage of seasons, cooking, family life, and the entire film is infused with a melancholy for a lost world and that recognizable philosophy of trying to find happiness in an apparently mundane life. The animation style is gentle with pastel shades, though incredible detail in the natural world. There is an almost picture-book quality to some of the artwork, especially in scenes when the story drifts between the “realism” of what is happening and the “brush strokes” of Suzu’s imagination. There are also a couple of impressionistic techniques employed, with a shockingly effective black on white sketch-style employed during one dramatic scene. The voice cast do a great job of bringing these characters to life. The relationships between Suzu and her in-law family form several great subplots along with that of the relationship with an old school friend and even a chance encounter with another young woman in the nearby town. While introducing many characters and plots, the film is well-paced, with many short scenes strung together to give the impression of a full and vibrant world. This is especially effective when we see Suzu doing household chores and time passing. There are references to time throughout the film that take on a terrifying significance as the plot draws closer to the atomic bomb falling on Hiroshima, something of which the characters are blissfully unaware, with the periods of time growing closer together as the inevitable tragedy approaches. 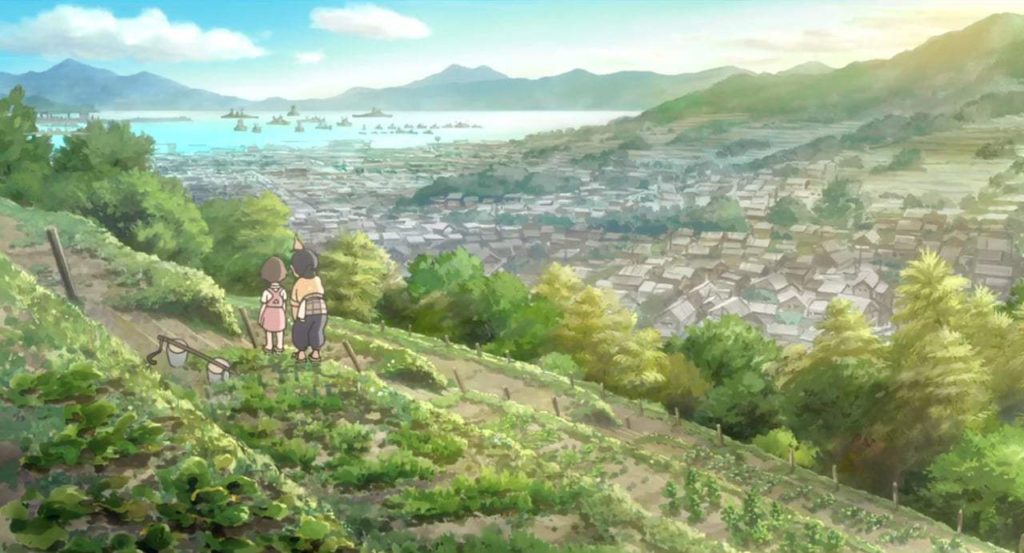 The film takes an interesting approach to its story. Ostensibly about the atomic bomb and the experience of ordinary Japanese citizens during the war, it is largely about memory and loss and is effective often for what it does not show, more than what it does. The war and the impending atomic catastrophe are things that are always on the periphery and being largely ignored by the characters. Suzu is a established early on as a daydreamer, whose understanding of the world is coloured not only by experience but her interpretation of it. This theme is later emphasised when she imagines the bursting artillery fire over the town as splashes of paint. This is a more relatable way of looking at the world than an overly melodramatic approach, and becomes more effective when thinking back over the film as you realise you have almost experienced the war as many at the time would have, without the foreknowledge of what is about to happen. The horrific consequences of the atomic bomb are something that are hard to imagine and the film instead focuses upon what led up to it, so that people can understand what had been lost when the world moved into a post-atomic bomb era. A truly great war-time epic focussing on the lives of an ordinary family living through extraordinary circumstances.

Takashi Miike’s remake of the 1963 Eiichi Kudo film brings a modern action movie feel to the historical epic. The story itself is partly based on real people and events. As brief expository text explains at the beginning of the film, it has been an era of relative peace for Japan, with the various warring factions under the control of the Shogun. That hard-won peace is threatened with the elevation of Lord Nagatsugi (Goro Inagaki), a sadistic noble, to a position of authority in the Shogunate. One of the Shogun’s top advisors, Sir Doi (Mikijiro Hira), realises the danger of such a man in a position of authority and goes to a samurai friend, Shinzaemon (Koji Yakusho), for help. Together they enlist a group of samurai, including Shinzaemon’s pupil Hirayama (Tsuyoshi Ihara) and nephew Shinrokuro (Takayuki Yamada), and Doi’s own men and set out on a mission to kill Nagatsugi, thus freeing the country from the terrible injustices he is visiting upon it.

The film opens with a brutal depiction of a man committing hara-kiri, this ritual disembowelment being a protest at the appointment of Nagatsugi. The scene is not particularly gory, but in its slow, careful build-up it creates a tension that is impossible to turn away from. Nagatsugi is introduced through a number of scenes that are equally stomach churning and set-up the perfect villain. He is a man completely lacking in morality, raping and killing at will, and torturing his victims; and any sense of right or wrong he has seems to revolve entirely around his own desires. Inagaki’s performance as the unpalatable Lord Naratsugi is truly chilling and keeps you watching in hopes that he gets his just deserts. He is helped by his advisor Hanbei (Masachika Ichimura), who is a man whose sense of service overrides any ideals of compassion for others, as he watches his master slaughter innocents on a whim. The thirteen assassins of the title are led by Shinzaemon, and Koji Yakusho turns in a great performance as the former samurai who is brought back into a world of conflict for the most important mission of his life. The film does a decent job with such a large cast, creating character moments that define them, although some more fully than others. Some of the standouts are Shinzaemon’s nephew, Shinrokuro, who is shown as a gambler and joins up out of a sense of honour; and Koyata Kiga (Yusuke Iseya), who is found by the group later in the film and is given a romantic backstory. The others are variously grouped together, or given short scenes of explanation, for the most part keeping them distinct and interesting in their own rights.

Takashi Miike is perhaps best known for his more outrageous films (Gozu, Happiness of the Katakuris, Dead or Alive”), so it is always interesting to see him taking on something more traditional in style. While the film captures the period perfectly, Miike and screenwriter Daisuke Tengan can’t help but slip in a few moments of black humour, such as when a recently decapitated head is kicked along the ground. In its violence the film also shocks, but in a way that fits the tone. Nagatsugi’s actions early in the film are almost unbelievably violent, but this is required in order to understand why his assassination, that goes against the wishes of the Shogun, is deemed necessary. In addition to this, by showing these horrors early in the film, there is a sense of dread throughout that anything is possible and the worst could quite easily happen.

“13 Assassins” is beautifully shot and care has clearly been taken in recreating the period, with stunning sets, often on a large scale, and costume and other details. There are also moments where the fight choreography and swordsmanship is given time to shine in the tradition of the best samurai films. The large cast of extras for armies and attendants goes a long way towards creating a sense of realism in the film. The cinematography by Nobuyasu Kita is exceptional and has a strong sense of rhythm to it, contrasting the quieter moments, such as the ritual disembowelment that opens the film, with the kinetic action of the final battle.

It is in this grand finale that the film truly excels, with a gloriously excessive battle sequence taking up almost a third of the entire runtime. Each of the characters is given a moment to shine, and nothing is safe as the huge set is almost entirely torn down by explosions, buildings collapsing, and hordes of extras racing around the streets in chaotic scenes of carnage. There is creativity in abundance, with every manner of weapon being used, tactics varying as the protagonists rush from skirmish to skirmish, either in man-to-man swordfights or facing off against larger groups. Miike oftentimes favours aesthetics and cinematic triumphs and tragedies over realism, putting this squarely in the action movie genre. Examples of this are katana being used to deflect flying arrows, the large gate contraptions that are set up to trap people into certain parts of the village, and the CG animals that are set alight to run tearing down the street. The camera work too is frantic, darting from one place to another, though never confusingly so as we always keep track of our heroes throughout the struggle. There are moments of real intelligence in the filming of the fight, as when it slips into hand-held footage, getting up close and personal with the actors, creating a sense of danger and drawing you into the heart of the fight.

As with many samurai films, the themes that come through strongest are those of honour and duty. With the assassins on the side of a moral right against their opponents who are the figures of authority and loyal to the leader. The character of Kiga is interesting in that he offers a glimmer of the contemporary critique of absolute rule and class-based society, berating the samurai for looking down on him and other people of lower classes. These ideas are never fully expressed (the film is having too much fun as a samurai action romp) but it is a fun addition to the story, offering a further denouncement of the notion that those in power deserve to be there purely by birth right, inheritance and that their actions are justified by their position. “13 Assassins” is a thrilling samurai action film, with excellent performances and memorable fight sequences.