Jiro Horikoshi is a  young man with a passion for aircraft, beginning with childhood dreams of designing his own flying machines. In his dreams he is visited by Caproni, an Italian aircraft designer, who shows him the delight of being an aircraft engineer. His childhood is also marked by a devastating earthquake, during which he meets a young girl, Nahoko Satomi, whom he meets again when they are adults. Jiro’s immense talents for design and love of aircraft land him a job at Mistubishi, creating several aircraft for them, including bombers and fighters. As the 1930’s wear on, Jiro is increasingly concerned about the connection between aircraft and warfare. He hopes that one day he will be able to create beautiful aircraft that will not be used as weapons.

Hayao Miyazaki’s love of aircraft can be seen all the way back with the flying machines of Nausicaa, and “The Wind Rises” allows him to fully explore his passion. Jiro Horikoshi is portrayed as a paradigm of good, whose only wish is to create beauty in an ugly world. Less fantastical than many Ghibli works, “The Wind Rises” plays like a wartime epic whose focus is not on the war, but on the people and aircraft that populated those times. There are numerous crowd scenes that give a genuine sense of society and community. People rushing by, packed together on trains, or scrambling in terror following an earthquake. These vignettes all show a society that is variously shifted by fate in unknown ways, and the idea that the community is a whole rather than a collection of individuals. Jiro’s own life is guided heavily by fate, in particular the wind. The first example of this comes when his hat is blown off and caught by Nahoko. The film shies away from an exploration of war as seen in traditional “war” films. The characters visit Germany in the 1930’s and there is a brief glimpse of the terror that was then engulfing that country, but for the most part discussions of Nazism and Japan’s own wartime exploits go unstated (the film does end before getting into the outbreak of war). We do see Jiro’s final creation, the famed Zero fighter aircraft, as a thing of tragic beauty, appreciating it with the designer’s eyes, while the voice-over explanation that none of these planes returned from conflict offers a grim counterpoint. Where the film triumphs is in its understated message of hope against adversity. Jiro is utterly committed to designing aircraft, and shows a dedication that few will ever be lucky enough to experience. His love for Nahoko is likewise a point of motivation for him. While the world seems to be falling apart through war and natural disaster, the film expresses the importance of fixing your sights on a passion and absolutely dedicating your life to it. An exceptional film that delivers on action and emotion.

From the opening scenes of a giant walking castle, it is clear that this film is going to be a magical experience. We are introduced to Sophie, a young girl making hats in her mother’s hat-shop. When the Witch of the Waste puts a curse on her, turning her into an old lady, she finds herself swept up into an often unexpected, but always thrilling world of wizards and spells. Sophie sets off to find Howl, whose improbably constructed castle can be seen wandering the landscape, in order to remove the curse, learning about life and love along the way.

The film is full of inventive moments, with the magic element giving the film a truly unexpected quality. Abundant spells mean that anything could happen, and often does. Sophie is a likeable character, with some funny moments and a plight that makes the audience care for her. One of the things the film does well is create a believable world. The artwork and animation is a wonder to behold with all the minute details on the walking castle and street scenes keeping your eyes busy trying to look at everything. The depiction of landscapes, mountains and lakes, do a perfect job in creating a sense of amazement at the natural world, and the action sequences are similarly engaging. The story takes place in a world at war, with a strong anti-war message. The way the film puts across this message is unusual in largely ignoring the war, showing it to be pointless and stupid, and instead focussing on the magic of the countryside and the enjoyment of peace. Instead we see battle-cruisers heading for war, or planes overhead, and the beautiful landscape surrounding offers a counterpoint to this, almost asking the audience to choose between the ugly mechanisation of war, or the rural idyll that the main characters spend most of their time exploring. The times when the war is depicted, it is a dark, dangerous place. The plot can be mysterious at times, but this further adds to the sense of this being a real place with complex characters all of whom have a past, and hopes and dreams. The music is fantastic, with an uplifting score that compliments the gorgeous visuals.

A highly enjoyable film, with creative use of magic and an style that makes every moment a pleasure. As well as a central love story, the film features several themes, including an anti-war message and ideas of aging and maturity. The transformation of Sophie into an old lady, and other transformations further emphasises the themes of growth and change. I would definitely recommend this film as it is packed with so many memorable moments, an engaging plot, likeable characters, and an incredible visual style. 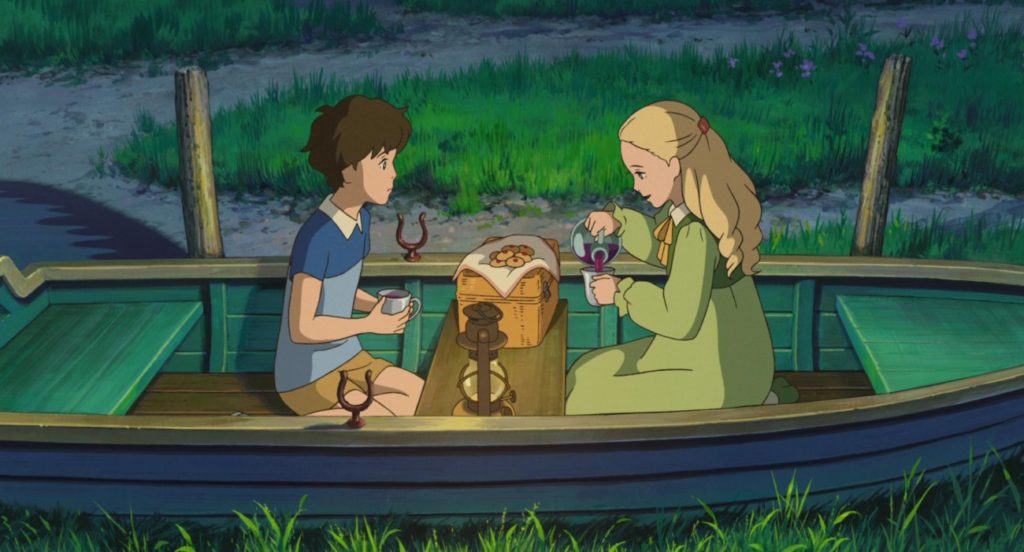