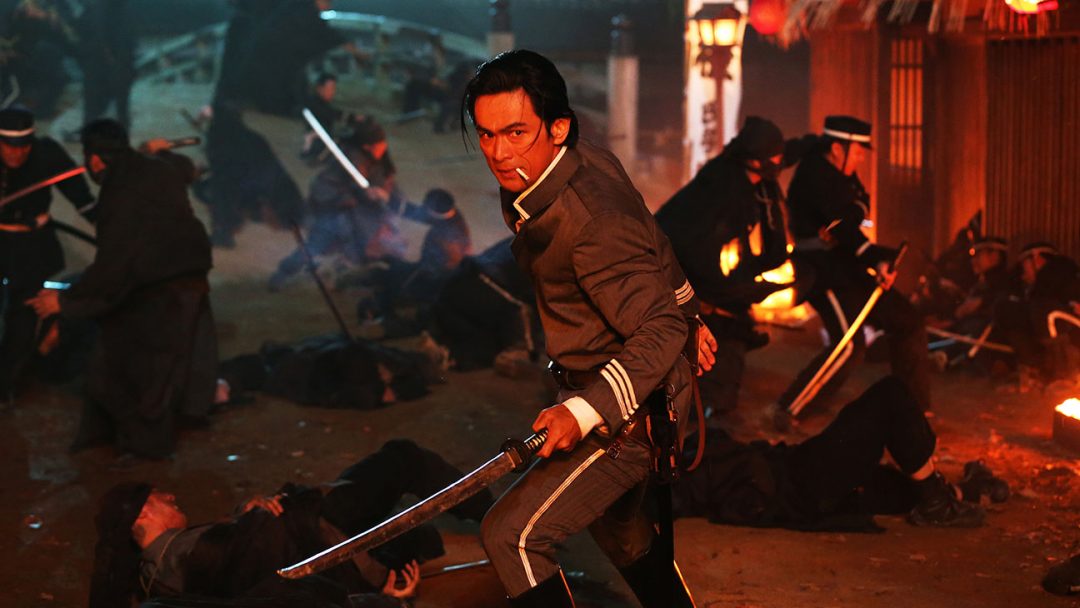 The film opens with an atmospheric sequence in which we see police chief Hajime Saito (Yosuke Eguchi) tracking down the dangerous gang-boss Makoto Shishio (Tatsuya Fujiwara), a figure who was believed to have been killed at the battle of Toba-Fushimi, which brought about the new age of peace in Japan. This opening sequence establishes Shishio as a dangerous villain, intent on exacting revenge on the world. We pick up the story of Himura Kenshin (Takeru Sato), and his friends Sanosuke (Muneta Aoki), Kaoru (Emi Takei), Megumi (Yu Aoi) and others from the first film, when he is asked to travel to Kyoto to find Shishio and kill him. Kenshin reluctantly  agrees, setting up a series of thrilling encounters with Shishio’s gang.

With the same cast and director as the first Rurouni Kenshin film, this includes much of what made that film great. The action sequences are exciting, well-choreographed, both one-on-one duels and fights against larger numbers. The film introduces a few new characters, including Sojiro Seta (Ryunosuke Miura), who has one of the best fights in the film with Kenshin. The story has a darker tone than the first, with a much more intimidating villain. Shishio appears wrapped in bandages after being betrayed and burnt in his last battle, and is believed to be equal in strength, speed, and skill to the semi-legendary Kenshin himself. The imagery of fire and hell in the beginning is a fantastic introduction to this character and sets the scene for an epic showdown. The film does a reasonable job of distinguishing itself, although the basic elements remain unchanged. Once again the film benefits from Takuro Ishizaka’s incredible cinematography and an epic score by Naoki Sato.

A fine sequel to the first film, with everything that was enjoyable about it reproduced here. The film-makers succeed in upping the tension with a darker, more violent villain and some incredible action set-pieces. The film is the first part of a two-part story, meaning that the end of the film builds to a climax that doesn’t arrive. However, it does an great job of setting up that confrontation for the next film.