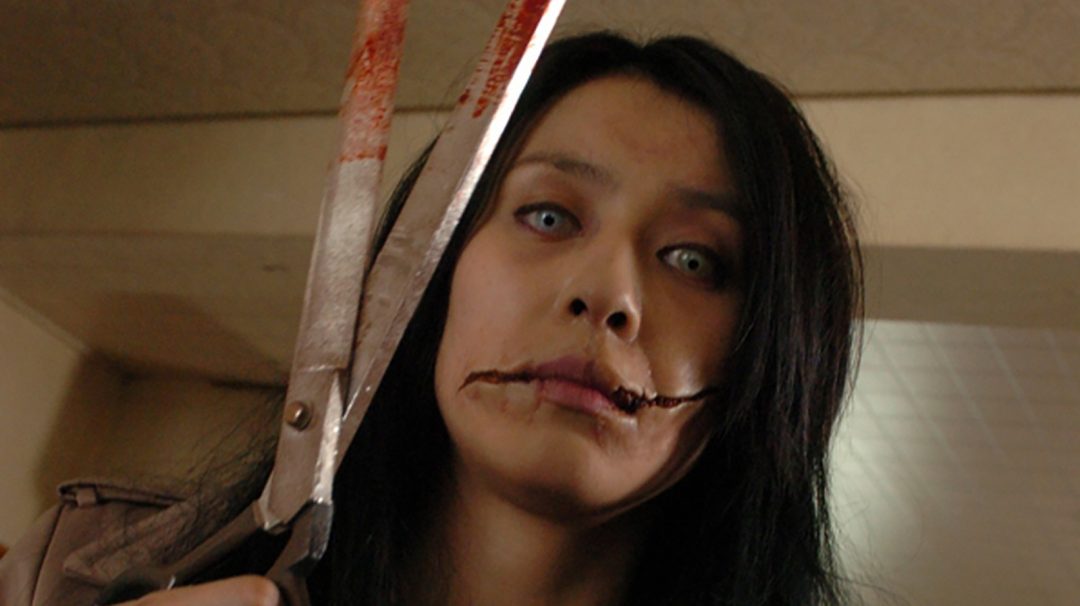 Based on a playground urban legend, this slightly silly horror sees a monstrous figure begin a terrifying rampage of kidnap and killing. The film begins with groups of children telling the story of the Slit-Mouthed Woman, who removes her mask to reveal a face sliced from ear to ear, and who cuts her victims in a similar way with a pair of large scissors. After an earthquake strikes the town, this woman begins to appear and snatch children in plain sight. When her student Mika (Rie Kuwana) is taken by the Slit-Mouthed Woman, teacher Kyoko Yamashita (Eriko Sato) along with Noboru Matsuzaki (Haruhiko Kato) set out to try and stop her and save the children that have been taken. They are helped by a schoolboy who has collected data on the woman, and Noboru’s personal experience as a child.

Directed by Koji Shiraishi (Noroi: The Curse) and written by Shiraishi and Naoyuki Yokota, “Carved: The Slit-Mouthed Woman” is standard horror fare, with a supernatural monster coming after young children, a dark backstory, violence and even a spooky old house in the woods. Part of the problem is in making such an urban legend into a believable figure. The Slit-Mouthed Woman’s appearances seem random, happening in broad daylight, witnessed by everyone, before equally sudden and inexplicable disappearances. This robs her actions of any tension in the buildup, often happening before you’re aware that there was even a threat. As a villain she also seems remarkably easy to stop or simply shove aside, as any character who attempts it ably demonstrates. The second narrative problem is in her motivation, which is muddled at best and non-existant at worse. The film may work better for children, with the children being the main victims and the non-supernatural horror revolving round mistreatment of children. It is this balance between a slightly spooky fable for children (watch out for strangers) and a genuinely terrifying horror for adults (keep an eye on your children) that sees the film perhaps pull back in certain moments, never fully developing the more troubling themes it hints at. On the positive side the film does have a great, if comfortably familiar, third act, when they finally track down the monster to her hideout and a fun showdown ensues. The sound design and score by Gen Wano and Chika Fujino also does a good job of evoking the eerie, sinister atmosphere of a ghost train.

The urban legend of the Slit-Mouthed Woman references a childhood fear of strangers and a parental fear of their children going missing. This film also weaves in a secondary horror that is more interesting than that primary narrative. We learn that Yamashita hit her young daughter, meaning that she is now no longer in contact with her. Her daughter lives separately with her father. Mika also suffered violence at the hands of her mother, as did Noboru. This theme of maternal child abuse provides a dark undertone to the film, and one that makes parts of it an uncomfortable watch. It is never made clear why the women act this way, presumably due to mental health issues, post-natal depression and multiple-personality disorders are hinted at. Instead the film seems to suggest that women occasionally turn violent for little reason. The depiction of such women as evil seems a step backwards in the understanding of such conditions. “Carved: The Slit-Mouthed Woman” is a fun horror that doesn’t expect too much from its audience, but could have used its platform to tell a more interesting or more nuanced story.